Conversations with Birds: The Beauty of Birds and Their Eco-systems

Conversations with Birds: The Beauty of Birds and Their Eco-systems

The Island Wildlife chapter of NCWF hosts author Priyanka Kumar for an exploration of the key themes in her essay collection, Conversations with Birds. In a time of climate crisis, can we think of birds in isolation without considering their ecosystems—the web of plant and animal communities they depend on? The talk delves into what the burrowing owl and the long-billed curlew can teach us about habitat restoration. Free and open to the public.

Priyanka Kumar is the author of Conversations with Birds, which has received wide acclaim. Her essays and criticism appear in The New York Times, The Washington Post, the Los Angeles Review of Books, Orion, and High Country News. Her work has been featured on CBS News Radio, Psychology Today, and Oprah Daily. She is a recipient of a Playa Residency, an Aldo & Estella Leopold Writing Residency, an Alfred P. Sloan Foundation Award, a New Mexico/New Visions Governor’s Award, a Canada Council for the Arts Grant, an Ontario Arts Council Literary Award, and an Academy of Motion Pictures Arts and Sciences Fellowship. Kumar holds an MFA from the University of Southern California’s School of Cinematic Arts and is an alumna of the Bread Loaf Writers’ Conference. She wrote, directed and produced the feature documentary The Song of the Little Road, starring Martin Scorsese and Ravi Shankar—which premiered at the Telluride Film Festival and is in the permanent collection of the Academy of Motion Pictures Arts and Sciences. Kumar has taught at the University of California Santa Cruz and the University of Southern California, and serves on the Board of Directors at the Leopold Writing Program.

From the Publisher: “Birds are my almanac. They tune me into the seasons, and into myself.” So begins this lively collection of essays by acclaimed filmmaker and novelist Priyanka Kumar. Growing up at the feet of the Himalayas in northern India, Kumar took for granted her immersion in a lush natural world. After moving to North America as a teenager, she found herself increasingly distanced from more than human life, and discouraged by the civilization she saw contributing to its destruction. It was only in her twenties, living in Los Angeles and working on films, that she began to rediscover her place in the landscape — and in the cosmos — by way of watching birds.”

If you’d like to read the book before the presentation, we hope you consider ordering your books from a local independent bookseller! You may find your local bookseller here: https://www.indiebound.org/indie-store-finder 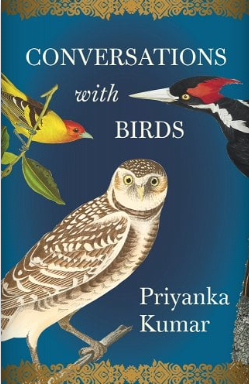