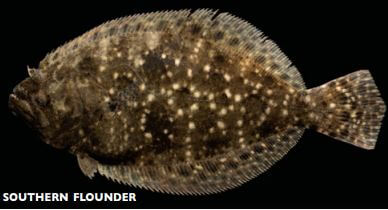 Southern flounder historically supported North Carolina’s most valuable inshore commercial finfish fishery and remains a highly sought after recreational species.  This species has been overfished since at least 1989, and efforts to rebuild this population through a North Carolina Fishery Management Plan (FMP) have been ongoing since 2003 with little success.

A sustainable southern flounder population provides benefits to the public through commercial and recreational fishing opportunities as well as support for a healthy ecosystem.  Yet, despite years of effort to reduce harvest and rebuild this important fishery, the population remains severely overfished.  A revised target date for rebuilding the fishery (2028) is already behind schedule.  The case of southern flounder provides a classic example of the Tragedy of the Commons and a violation of the Public Trust Doctrine.

How We Got Here

North Carolina commercial landings of southern flounder averaged 3.6 million pounds from 1994 to 2003. During this period, recreational landings only accounted for approximately 13% of the total landings for the state.  Declining landings and troubling trends in biological data prompted the initiation of an FMP in 2003.

The southern flounder FMP, adopted in 2005, indicated that overfishing had likely been occurring since at least 1991 and the harvest reduction needed to rebuild the stock was approximately 30%.  The North Carolina Marine Fisheries Commission (MFC) dismissed the state’s Division of Marine Fisheries (DMF) science and adopted a 15.1% reduction for the commercial fishery and a 30.5% reduction for the recreational fishery.

A 2009 stock assessment indicated that the original FMP was inadequate, that the stock was overfished, and that overfishing was still occurring.  Supplement A to the FMP was developed to increase the recreational minimum size limit to 15 inches and reduce the bag limit from 8 to 6 fish.  No further action was taken on the commercial fishery at this time.

Amendment 1 was developed and adopted in 2013.  While Amendment 1 indicated that some improvements had occurred, southern flounder remained overfished and overfishing was still occurring.  Current harvest reductions remained insufficient.  Amendment 1 re-adopted the measures in Supplement A to the FMP and accepted management measures (primarily restrictions on large mesh gill nets) to reduce sea turtle bycatch as the measure to achieve the additional commercial harvest reductions needed to rebuild.  Amendment 1 also increased the sustainability benchmark from achieving a spawning potential ratio of 25% to a spawning potential ratio of 35%, a conservative and reasonable decision based on the science.

A new stock assessment in 2014 was rejected for management.  New information confirmed that southern flounder was a coastwide stock and required a coastwide assessment rather than an assessment that only addressed North Carolina southern flounder.  However, the assessment information was sufficient to indicate that the status of the stock was declining and more needed to be done.  Supplement A to Amendment 1 was adopted in 2015.  The commercial harvest reduction measures contained in Supplement A that included seasons and quotas were deemed adequate to resolve the problem but that was challenged by the North Carolina Fisheries Association and enjoined by a judge in 2016 with no new harvest reductions allowed until Amendment 2 was adopted.

During the period under Amendment 1 and the injunction (2013 to 2018), southern flounder commercial harvest further declined from 2.2 million pounds to 900,000 pounds and recreational harvest declined from 869,223 pounds to 495,289 pounds. A new, 2019 coastwide stock assessment deemed adequate for management indicated fishing mortality rates had increased greatly and now required a 72% reduction to rebuild the fishery to the target biomass within the statutory timeline. In retrospect, the assumption that the measures to protect sea turtles would meet the necessary reduction to rebuild the stock was incorrect. Further, the 2019 stock assessment report concluded that the model results consistently overestimated biomass and indicated the highest risk of overfishing, suggesting actual stock status was worse than described and required a precautionary approach.  Finally, the 2019 stock assessment concluded that the “estimates of fishing mortality for the entire U.S. South Atlantic coast are largely a function of the commercial fishery operating in North Carolina”.

The 2019 stock assessment determined the species was even more severely overfished and overfishing was even more extreme. After several years of a stalemate due to the judge’s ruling, Amendment 2 was finally adopted by the MFC in 2019. The goal of Amendment 2 was to “implement management measures to achieve sustainable harvest in the southern flounder fishery to end overfishing by 2021 and rebuild the spawning stock by 2028”.

To achieve this goal, the peer-reviewed, 2019 stock assessment stated that harvest had to be reduced by 72%. Despite this clear statement in the stock assessment, the DMF recommended and the MFC approved Amendment 2 in 2019, which only required a 62% reduction in harvest for 2019, further delaying the necessary 72% reduction until 2020.  Concerns were raised by North Carolina Wildlife Federation (NCWF) regarding the state’s ability to control the harvest with no quota, harvest limits, or tracking system in place to ensure reductions were met.  These concerns proved valid as the reduction achieved in 2019 was only 34%.

Despite awareness of the 2019 harvest reduction shortfall in early 2020, no effort was made or discussed by the DMF or MFC to adjust 2020 harvest reductions to get back on track.  The 2020 commercial seasons opened during peak harvest season with still no controls other than a season; therefore, the likelihood of achieving the needed 72% reduction in the 2020 harvest is slim.  Importantly, even if a 72% reduction is achieved in 2020, the overharvest in 2019 compromises the overall rebuilding projections.

When questioned about these concerns, the DMF responded that the harvest reduction shortfalls were anticipated and that overfishing had ended as a result of the 34% reduction achieved.  However, Amendment 2 (page 21 option A) states, that simply reducing the harvest to the overfishing threshold “Will not meet the reduction in the commercial fishery needed to achieve a level of spawning stock biomass for sustainable harvest within the 10-year time period, failing to meet statutory requirements”.

Amendment 3- More of the Same

The management measures being developed in Amendment 3 are based on the same stock rebuilding projections contained in the 2019 stock assessment that were developed for Amendment 2.  Projections NCWF believes are now invalid.

A review of commercial landings indicates that 2018 removals were actually less than the 5-year average from 2013-2017.  While this supports meeting the projection requirements, whether the decline was due to regulations or lack of fish is unknown.  With no change in regulations in 2018, reduced harvest may indeed be a result of fewer fish.

The projections require the 72% reduction in harvest to begin in 2019 and all subsequent projections depend on that, and subsequent reduction being met.  Again, because 2019 landings indicate that harvest was only reduced by 34% in 2019, the projections and assessment are no longer valid instruments to base management actions in Amendment 3 upon.

Where the Science Leads Management

NCWF believes that Amendment 2, like previous plans, failed to protect and enhance marine resources in the best interest of the public trust. The plan took only partial action in the face of a collapsing fishery that is critical to the economy of eastern North Carolina.  The only explanation for failing to follow the science was to protect fishermen rather than the resource.

The state is currently developing Amendment 3 to address the issues using rebuilding projections that are no longer valid.  Consequently, after overfishing southern flounder for at least 30 years and failing to properly manage the fishery through the fishery management planning process under which the stock has actually gotten worse, draconian action will likely be required.

Preliminary information received from DMF regarding the development of Amendment 3 indicates that more stringent regulations are indeed being proposed, but these appear insufficient to meet the stated goals of the plan.  A hard quota of 532,352 pounds is proposed to be allocated: 27% to the recreational fishery, and 73% to the commercial fishery.  NCWF questions how this allocation was derived and why the commercial sector would be allocated the majority of the harvest when the stock assessment clearly indicates that the North Carolina commercial fishery is the primary factor in overfishing the stock.  We believe that a strong argument can be made that the historical allocation proposed by DMF does not reflect the boom in numbers of recreational anglers or the impact they now have on North Carolina’s economy.

Time to Fish or Cut Bait

NCWF believes a re-calculation of the reductions needed to rebuild the stock are necessary in order to address the shortfalls in harvest reductions that occurred in 2019 and that are anticipated in 2020.  A delay in action to conduct a new assessment is unacceptable.  Modified reductions must take into account the science that indicates that the stock is actually in worse condition than the stock assessment portrays and requires a precautionary approach.  Finally, a mere 50% probability of success is unacceptable after previous attempts to rebuild this fishery erring on the side of the fishermen have failed for the past 15 years.  Time for a change!