America’s Top 10 Federal Conservation Laws for the Protection, Preservation and Enhancement of Wildlife and Wild Places 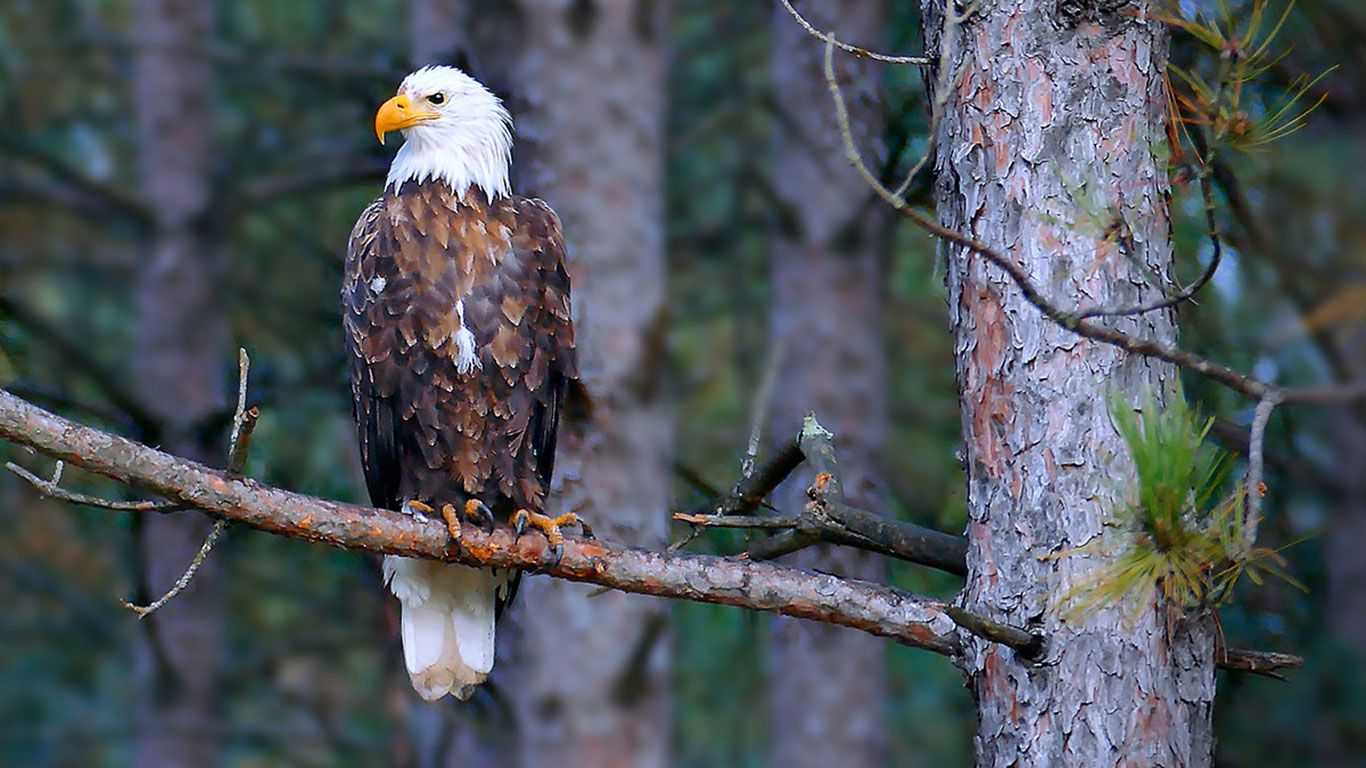 When thinking about the recent work of the U.S. Congress, an old adage comes to mind: “To know where you are going, you have to know where you’ve been.” The United States has a long history of environmental legislation, with land mark laws that impact every American. Some are directed at water, air, and land protections, while others shore up fish and wildlife species that are a critical part of America’s sporting and recreational heritage. In this review of the top 10 federal acts that benefit wildlife and habitat, NCWF highlights the foresight and leader ship exhibited by elected officials and the positive ramifications of their work.

Introduced by Iowa Republican congressman John Lacey in 1900, this bill is the cornerstone legislation that protects fish and game from illegal poaching. The first major federal legislation to protect wildlife in America, the Lacey Act bans interstate or foreign commerce involving any fish, wildlife, or plants taken, possessed, or sold in violation of state or foreign law. The Act has been amended to include a wider variety of prohibited plants and plant products, including some rainforest species, and to curb the transport of non-native pythons to the Everglades. In North Carolina, it is used to curb efforts to transport deer and feral hogs into the state. As the proliferation of non-native and invasive species continues, wildlife agencies are fortunate to have the Lacey Act in their toolbox.

Established in 1972 under President Richard Nixon, the Clean Water Act set national standards for the quality of our streams and lakes. Just before the Act was passed, rivers like the Cuyahoga in Ohio were literally on fire and lakes like the Thonotassa in Florida were experiencing the largest fish kills in history. Here in North Carolina, the mudchoked French Broad River was described as “too thick to drink  and too thin to plow.” The Clean Water Act empowered the Environmental Protection Agency to implement regulations on pollution discharges into our waterways. Water quality standards were established and sewage treatment facilities were  constructed. With the goal of “drinkable, swimmable, fishable water,” the Clean Water Act is critical to the nation and to North Carolina and has revived many of our waterways. With more sound and estuarine waters than any other lower 48 state besides Louisiana, and with a quarter-million miles of rivers and streams, North Carolina needs the Clean Water Act protections restored and clarified to ensure the health and prosperity of our economy and our environment.

Commonly known as Pittman-Robertson after its sponsors, this 75-year-old legislation established an excise tax on firearms and ammunition. Monies go into the Interior Department and are distributed to states, which match the funds with 25 percent of monies from hunting license sales. On average, North Carolina receives about $13 million per year for wildlife research, management, and habitat protection. Species such as white-tailed deer, wild turkey, and wood ducks are shining examples of restoration supported by the legislation. This “tax legislation on sportsmen,” which actually was adopted during the Great Depression, is a shining beacon in the history of wildlife legislation and proves that dedicated revenue collections can indeed be accomplished. THE ENDANGERED SPECIES ACTBIn the early 1970s, President Richard Nixon believed that conservation efforts were failing and inadequate and called on Congress to pass comprehensive reform. In 1973, what some call the Magna Carta of the environmental movement was enacted. The Endangered Species Act serves to protect plant and animal species in threat of extinction, especially as a “consequence of economic growth and development untempered by adequate concern and conservation.” The U.S. Fish and Wildlife Service and the National Marine Fisheries Service are fully empowered to implement the Endangered Species Act. The Act helps to protect our national heritage by preserving the bio – diversity of plants and animals such as shining examples of success like the bald eagle, peregrine falcon, and southern sea otter. An example of the Endangered Species Act at work in North Carolina includes the red wolf reintroduction at Alligator River National Wildlife Refuge. North Carolina made history again when the Pinehurst Resort was the first to sign a Safe Harbor Agreement to support the endangered red cockaded woodpecker.

The Dingell-Johnson Act, also referred to as the Federal Aid in Sport Fish Restoration Act, was enacted in 1950 to provide federal funding support to state fisheries management agencies. Similar to the Pittman-Robertson program, the fund was originally derived from a 10-percent excise tax on certain items of sport fishing tackle. In 1984, the Wallop-Breaux amendment expanded the types of fishing tackle subject to the 10-percent tax by placing a 3-percent excise tax on fish finders and trolling motors, collecting import duties on fishing tackle and yachts and other pleasure craft, and incorporating a portion of the fuel taxes attributed to motor boats. In fiscal year 2013, North Carolina’s portion of the fund was more than $10 million. State fishing license receipts, boating registration fees and other non-federal money are used as matching funds ($3 federal for every $1 state) to support fisheries management in fresh and marine waters, boating access, boating safety and aquatic education. Apart from providing money to support aquatic conservation, the Act also has the little-known stipulation that if a state diverts any portion of its fishing license receipts to fund other programs, it will lose its entire allocation of Dingell-Johnson funds. For more than 60 years this provision has ensured that 100 percent of anglers’ and boaters’ license fees goes directly to support fishing and boating recreation.

The Magnuson-Stevens Act was enacted in 1979 and has been amended several times. The law established a fishery conservation zone in ocean waters that extends from the 3-mile state jurisdiction to the 200-mile federal jurisdiction. A critical element of the act was the creation of eight regional councils to manage fish populations within the conservation zone to prevent overfishing, allow overfished stocks to recover and manage all fisheries stocks in a sustainable manner. North Carolina is a member of both the South Atlantic and Mid- Atlantic Fishery Management Councils. In the South Atlantic region seven of the eight man-aged species groups are determined to be at sustainable levels.

One of the first influential pieces of environmental legislation in the country was enacted in 1913. Before this law was adopted, bird species, nongame and game alike, had no protections and the fashions of the 1800s and 1900s were keen on bird feathers, especially herons and egrets, for hats. The trade in feathers took a tremendous toll—by most estimates, 200 million wild birds were killed per year. Populations of the most hunted species declined to dangerous levels. The Migratory Bird Act gave the federal government full authority to protect migratory birds with today nearly 800 species listed for protection. In 1918, the legislation was widened in an international convention agreement between the U.S. and Great Britain and subsequently with Canada, Mexico, Russia and Japan. Under the Act, the taking, killing, disturbing of nests, and possessing of migratory birds is highly regulated. The U.S. Fish and Wildlife Service is granted the authority to set hunting seasons for waterfowl and other migratory birds based on species populations.

This law, enacted in 1966 but founded on earlier legislation, provides for administration and management of all areas in a national system of “wild-life refuges, areas for the protection and conservation of fish and wildlife that are threatened with extinction, wildlife ranges, game ranges, wildlife management areas, and waterfowl production areas.” In 1903, President Theodore Roosevelt established Florida’s Pelican Island National Wildlife Refuge as the first parcel of what is now a system of more than 95 million acres within 556 National Wildlife Refuges across the Country. A major stimulus for the refuge system came in 1934 with the passage of the Migratory Bird Hunting and Conservation Stamp Act, commonly referred to as the “duck stamp act.”

National Wildlife Refuges secure, enhance, and manage in perpetuity this nation’s natural treasures of wild habitats, both aquatic and terrestrial, and populations of fish and wildlife that inhabit these habitats for all citizens to enjoy. North Carolina has 10 National Wildlife Refuges that provide homes for red wolves, waterfowl, bear, turkey, deer, shorebirds and native flora.

When an act has the mission to “administer a national network of lands and waters for the conservation, management and, where appropriate, restoration of the fish, wildlife and plant resources and their habitats within the United States for the benefit of present and future generations of Americans,” it has to make NCWF’s Top 10 fish and wildlife bills of all time.

This land-mark legislation was passed by Congress in 1964 and signed by President John F. Kennedy. Its objective is to balance the use of offshore oil and gas by allocating a small portion of energy leasing revenues to acquire important habitat and recreational land, and to improve public access to fish, wildlife and other natural resources. The Land and Water Conservation Fund (LWCF) was set up to direct $900 million annually from offshore oil drilling revenues to pay for conservation projects in national parks and national forests, fish and wildlife refuges, local parks, and other public lands. The beauty of LWCF and its dedicated revenue stream from drilling leases is that no tax money is involved and only a small percentage of the lease fees are designated for the LWCF. Since the founding of the LWCF, however, it has rarely been funded at or near the annual $900 million statutory level as Congress has repeatedly raided the fund, taking dollars that should have been gone toward important conservation initiatives and using them for other expenditures. The annual diversion of LWCF funds to non-conservation purposes has left a long legacy of backlogged conservation projects across the nation. To prevent overdevelopment and increased pollution from continuing to threaten North Carolina’s environment, a large effort is underway to restore dedicated revenues to LWCF, spearheaded by North Carolina Senators Richard Burr and Kay Hagan. This fund is the primary funding source in America for land preservation. In North Carolina it has helped protect the Roanoke River and Alligator River national wildlife refuges, the Croatan National Forest, and the Cape Hatteras and Cape Lookout national seashores.

This behemoth 1940s legislation covers agricultural production and distribution, as well as hunger issues, and would not make the NCWF Top 10 list if not for its evolution in 1985. The Farm Bill, which can be called the greatest conservation law you’ve never heard of, added a conservation title leading to the nation’s most successful voluntary conservation programs for private landowners and farmers interested in protecting wildlife habitat, controlling soil erosion and reducing polluted runoff. The program is based on technical and financial assistance from platforms such as the Conservation and Wetlands Reserve Programs. The Farm Bill is among the largest sources of conservation funding in the federal government, with hundreds of millions of dollars available to keep wetlands, grasslands, and other fragile lands protected as wildlife habitat. The bill, which is authorized in 5-year increments, gained even more value for conservation in 1990 when wildlife was emphasized. That change led to wildlife corridor protections and the conversion of marginal lands and other environmentally sensitive acreage to vegetative cover, such as native grasslands, riparian buffers, using thinning and prescribed burns to mange habitats for upland habitat. Congress is marking up the next Farm Bill, and there are opportunities to ensure that the conservation programs of the Farm Bill are upheld as well.

Posted in Our Work, Habitat, Wildlife
Back to News / Blog