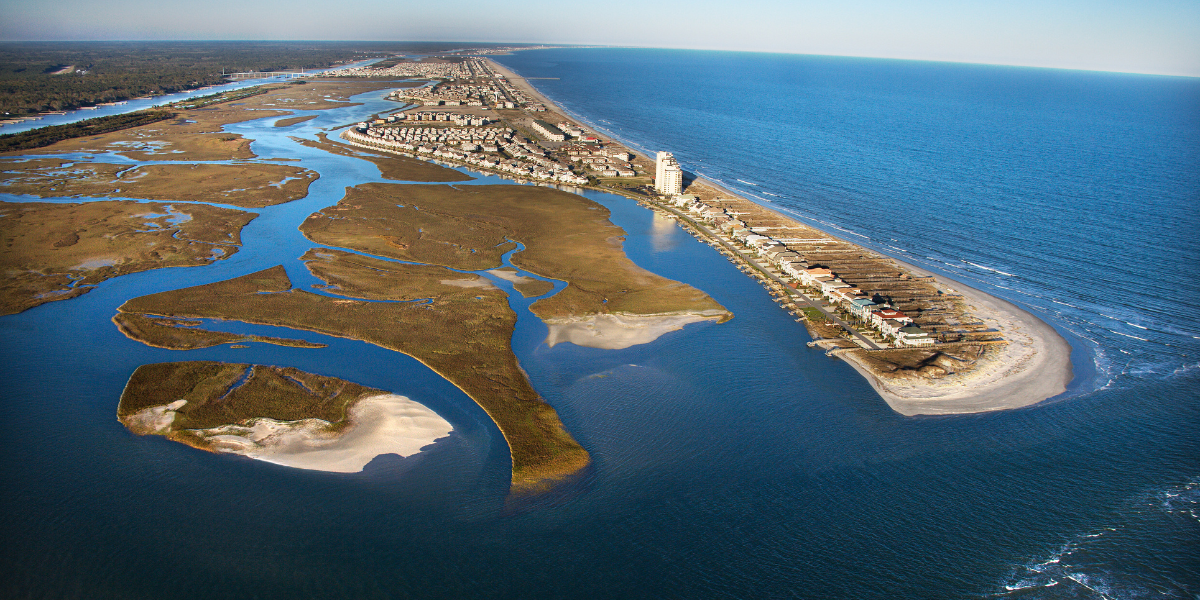 For decades, if not centuries, North Carolina’s fisheries managers believed coastal resources were inexhaustible; the term “collapsed” wasn’t in their vocabulary. However, human population growth and subsequent increased demand for seafood, coupled with advances in fishing gear and supporting technologies, prove that fisheries resources are indeed finite. At present, many—if not most—fish stocks worldwide are overfished. This paper examines the current status of North Carolina’s fish stocks and answers the question, “When does overfishing result in actual stock collapse?”

Definitions of collapse and collapsing

In the early 1980s, author J.G. Cooke defined “collapse” as the “reduction of a fish stock by fishing or other causes to levels at which the production is only a negligible proportion of its former levels” (Ferguson-Cradler 2018). The article further notes, “fisheries collapses were understood as State failures, thus becoming events critical in the remaking of management regimes.” In these cases, “collapse” was a crisis of scientific modeling and interpretation, with significant implications for how managers would conceive of risk, crisis and uncertainty.

An article published in Proceedings of the National Academy of Sciences (Pinsky et al. 2011) provides a more scientifically rigorous analysis and definition of “collapsed” in the fisheries management context. The authors defined a stock as collapsed if the minimum annual biomass fell to less than 20% of the biomass necessary to support maximum sustainable yield. In the absence of robust stock assessments to provide these values, the authors suggest examining landings as a proxy. If for 2 consecutive years stock landings fall below 10% of the average of the 5 highest years’ landings recorded, then the stock has collapsed. The authors found that employing landings data had a lower misclassification rate than others.

North Carolina Division of Marine Fisheries (DMF) provides state commercial landings data back to 1972. Using that data, this paper examines the current status of North Carolina public-trust fish stocks relative to the above definitions of “collapsed” and “collapsing,” for all fisheries managed exclusively by DMF.

In addition, we added three species—Atlantic croaker, spot and weakfish—that, while primarily managed by the Atlantic States Marine Fisheries Commission (ASMFC), have special significance in North Carolina fisheries management. Each stock was once a significant component of North Carolina’s commercial gill net, fly net, pound net and haul seine fisheries, and all are historically sought after by public anglers.

Table 1 compares the stock status reported by DMF in 1998–the year after the enactment of the North Carolina Fisheries Reform Act of 1997 (FRA)–with its most recent status report some 24 years later in 2022. 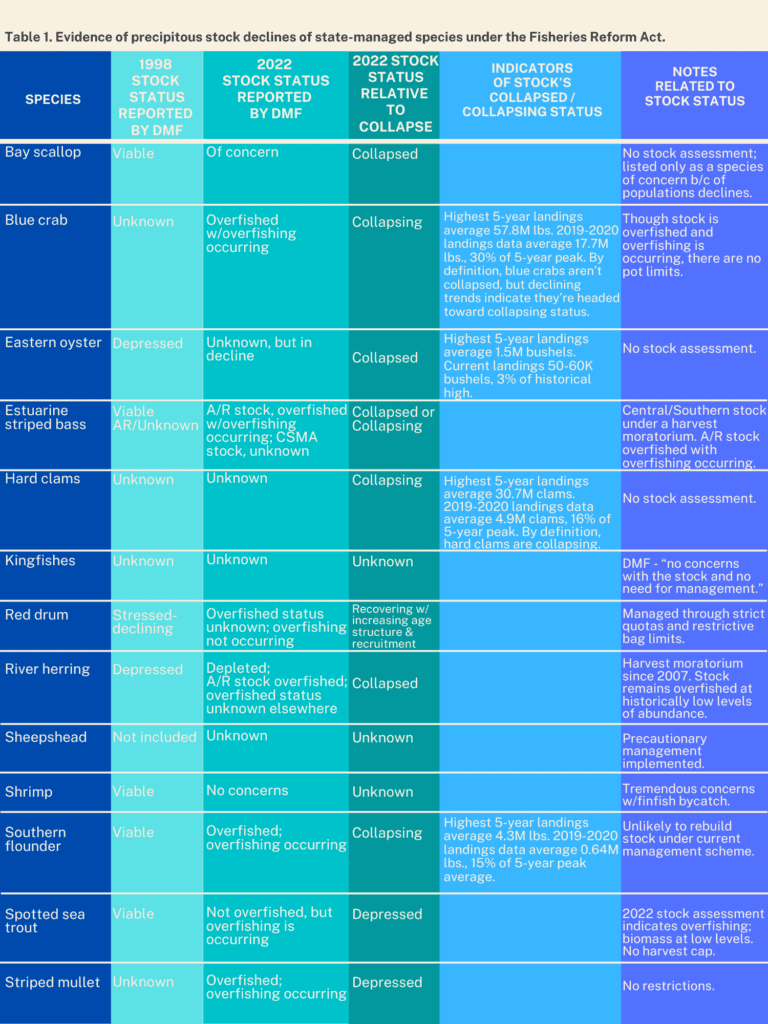 An examination of Table 1 shows:

Moreover, as Table 1 evidences, most state-managed coastal fish species have collapsed or are collapsing mainly due to overfishing. While low current landings for Southern flounder, and possibly a few other species, are impacted by currently strict harvest limits, biological data associated with those fisheries—a pivotal component to assessing fish stocks—are consistent with collapsed or collapsing fisheries.

This analysis, however, doesn’t discount the potential influence in some fisheries of environmental conditions beyond the control of fisheries managers. Disease, water quality and habitat loss can play varying roles in fisheries declines, depending on the species. But continued fishing on populations stressed or depressed by adverse environmental impacts only amplifies the problem, especially for fisheries with high rates of unknown bycatch. Consequently, state fisheries managers cannot allow continuing harvest of any kind—public or commercial—on public-trust stocks currently existing at pre-collapse levels, with a reasonable expectation of population recovery.

Some fish stocks are not confined to North Carolina but migrate across state boundaries, where they are subject to different environmental conditions and harvest regimes related to management restrictions and allowable gear. As a result, those stocks are managed cooperatively by the various states and are termed “interjurisdictional fisheries.” North Carolina manages those stocks by participating in the ASMFC and U.S. Regional Fishery Management Councils. In North Carolina, the ASMFC manages several fish stocks that are historically important both to public anglers and commercial fishermen, including Atlantic croaker, spot and weakfish.

Based on North Carolina landings data, these three species are classified as “collapsed” or “collapsing,” just as is true for many stocks managed solely by DMF. However, examining the stock throughout its geographic range is critical to determine true biological, coastwide species viability. But that wider stock viability context does not negate the trustee duty of state fisheries managers. North Carolina law requires DMF to manage Atlantic croaker, spot and weakfish under a state FMP. As such, we argue the State is legally obligated to remedy non-viable stock status whenever possible through state management, even if the collapse occurred only in North Carolina.

Looking, then, at the collapsed/collapsing status of Atlantic croaker, spot and weakfish under coastwide management, we find that their individual statuses are not significantly better than when their statuses are considered for North Carolina alone.

These data, viewed collectively, clearly indicate that the Atlantic croaker stock is collapsed coastwide. Despite this collapsed condition, harvest restrictions of Atlantic croaker under ASMFC management have been extremely limited, with a very liberal public bag limit of 50 fish, no species size limit, and only a two-week commercial closure in the primary producing states of Virginia and North Carolina.

The most significant source of Atlantic croaker mortality in North Carolina is the killing of juvenile fish taken as shrimp trawl bycatch.

The 2017 ASMFC Atlantic Croaker Stock Assessment Peer Review Panel reported that “shrimp trawl bycatch accounted for 81-99% of annual Atlantic croaker removals and averaged 91.6% of all removals.” To compound that bycatch problem, Atlantic croaker are also a significant component of the scrap/bait fishery, peaking at over 3.5 million pounds in 1989.

The collective data for spot show a coastwide collapse of that species. The relative “contribution to total North Carolina finfish landings” data also indicates that the spot stock was collapsing in North Carolina from 2016 to 2019. Despite this condition, ASMFC management has been minimal, relying heavily on bycatch reduction devices (BRDs) in shrimp trawls as the primary management approach to protecting the coastwide spot stock.

However, state BRD research only examines the reduction in bycatch at the “tow level.” Studies have not examined the impacts throughout the months-long shrimp season to assess the population effects of repeated tows in the confines of North Carolina’s sounds and rivers. Studies also ignore the impacts of predation during and after the fishing operation. To date, no quantitative analysis shows any resource benefit from the implementation of BRDs.

Based on our review, these ASMFC-managed species—Atlantic croaker, spot and weakfish—historically comprised a significant portion of North Carolina’s public and commercial harvest of state coastal fisheries resources. Today, their stock landings are just a fraction of their historical values. All stocks are collapsed coastwide, yet reducing stock harvest mortality is not a priority of either ASMFC or DMF.

It is extremely important that, while the stocks have declined coastwide, the most significant source of fishing mortality for all three collapsed fisheries is shrimp trawl bycatch in North Carolina’s Pamlico Sound.

This area includes surrounding sounds, bays and rivers that serve as critical nursery habitats for these collapsed and other finfish species. Further, the fact that juvenile spot and Atlantic croaker comprise a sizable component of the bait/scrap fisheries in North Carolina and Virginia is a significant concern for future management of this species to reverse their collapsed statuses and to restore coastwide stock viabilities.

Other South Atlantic states also have significant shrimp trawl fisheries; however, those states either substantially restrict estuarine trawling or limit shrimp trawling to the Atlantic Ocean. Their shrimp trawl fisheries have less bycatch of larger fish (Brown 2015) and do not occur on primary nursery grounds. Although DMF highly touts BRDs as an effective way to reduce finfish bycatch, no verified studies support the quantitative benefits of BRDs to finfish stocks. Further, North Carolina’s failure to implement appropriate size limits for Atlantic croaker, spot and weakfish, coupled with the continued allowance of these species as a bait component, only adds to the collapsed fisheries problem.

ASMFC’s historical hesitancy to develop an interjurisdictional shrimp FMP to reduce shrimp trawl bycatch further is primarily because most of the problem occurs in one state—North Carolina. While ASMFC has always hoped that North Carolina would voluntarily and independently address the situation, that is unlikely to happen. The State’s recent adoption of Amendment 2 to the N.C. Shrimp FMP demonstrates North Carolina’s unwillingness to responsibly regulate the shrimp trawl industry in the best interest of all North Carolinians, much less the interests of citizens in our neighboring states.

In comparing even the very lowest finfish bycatch estimates, North Carolina’s shrimp trawl bycatch vastly exceeds the public and commercial harvest of Atlantic croaker, spot and weakfish for the entire East Coast (Table 2). Because each of these three stocks is collapsed or collapsing, it’s unlikely that these species and others adversely impacted by excessive shrimp trawl bycatch (blue crab, Southern flounder and kingfishes stocks) can achieve even short-term harvest sustainability. It is virtually impossible that any of these species will achieve long-term viability absent responsible regulation of the North Carolina shrimp trawl fishery by DMF. 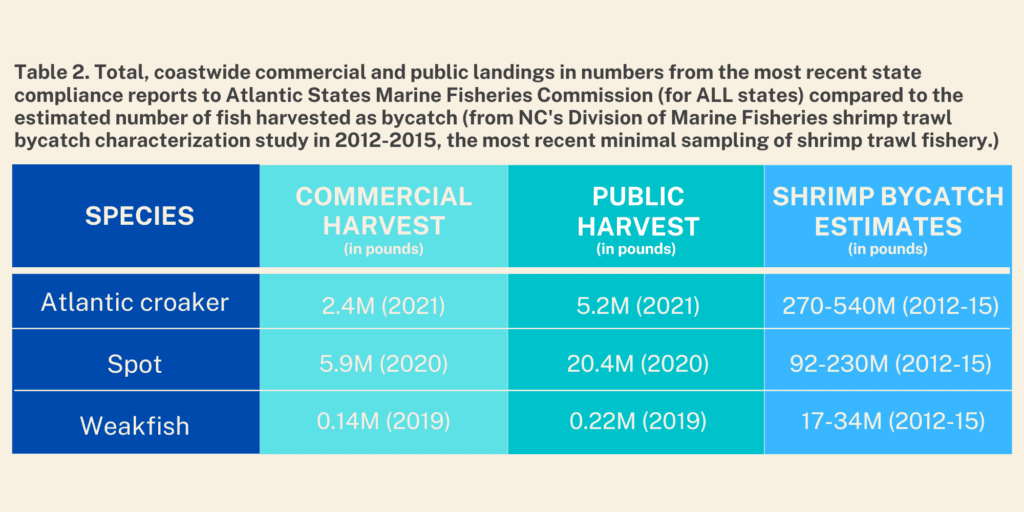 Finally, we note that there are at least two historically valuable public and commercial North Carolina fisheries—Atlantic sturgeon and shortnose sturgeon—that are not discussed above because the fishery collapsed long ago (and the stock remains under a fishing moratorium because population numbers cannot sustain harvest), or because stock depletion and collapse caused by overfishing was so severe that the stock was placed under the protection of the federal Endangered Species Act, imposing a complete harvest moratorium on the fishery.