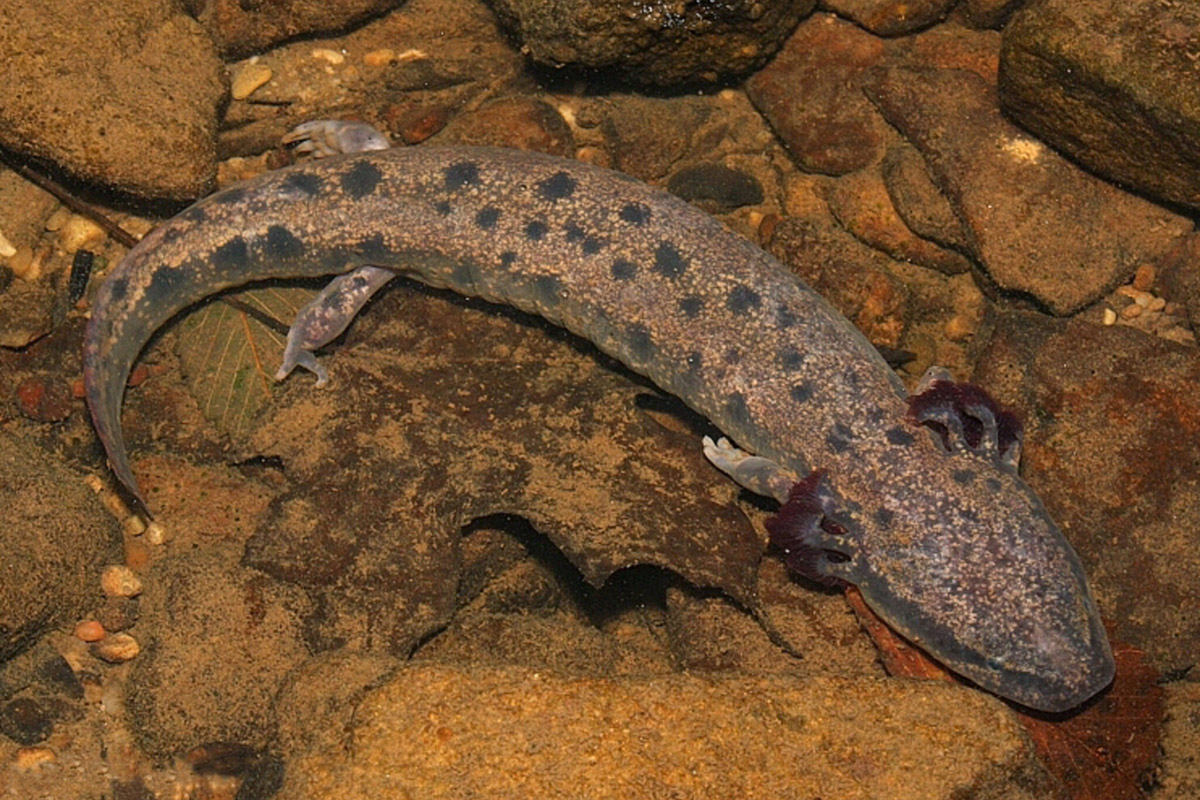 Biologists with the N.C. Wildlife Resources Commission (NCWRC) are asking the public, particularly anglers, to submit any sightings of mudpuppies to the agency.

The mudpuppy is a relatively rare salamander that shares a similar appearance and habitat to its larger cousin, the eastern hellbender. Similar to the hellbender, the mudpuppy is an entirely aquatic salamander found in western North Carolina. While it lives in many of the same waters as hellbenders — fast moving, clean mountain streams — the mudpuppy’s habitat also includes areas such as deep river reaches, lakes, large ponds, and reservoirs.

The goal of reporting these sightings is to help biologists learn more about the mudpuppy’s distribution in North Carolina. Reported sightings are critical to biologists who know relatively little about this amphibian that is a state-listed species of concern.

“We really know less about mudpuppies in the state than we do hellbenders,” said Lori Williams, an NCWRC Wildlife Diversity biologist. “We’ve not done any surveys in lake systems because of the challenging logistics… but mudpuppies do like those habitats, which could be population hot-spots for them. We just need anyone who fishes these deep river sites and impounded waters who finds one to let us know.”

Despite their similar appearance, the mudpuppy typically has spots and is smaller than the hellbender, averaging 12 inches in length as an adult, while the hellbender, the largest salamander in North America, is about 16 to 17 inches in length. In addition to being smaller, the mudpuppy has external, red feathery gills on either side of its head and smooth skin; whereas hellbenders have an inconspicuous gill slit and wrinkly skin.

Mudpuppies have a similar diet to hellbenders and mainly eat crayfish, but may also eat minnows, snails, tadpoles, worms, and discarded bait or other weak or dead animals, so it will  occasionally go after a trout on a line or stringer. However, game fish like trout and bass will eat young or larval hellbenders and mudpuppies. In lakes and deep river sections, mudpuppies are often attracted to baited hooks, so bass anglers, in particular, may catch one.

Neither the mudpuppy nor the hellbender are poisonous, venomous, toxic or harmful to humans, although they may try to bite as a defensive reaction if someone tries to pick them up. Leaving them alone is not only good for them, but it is also the law. Like the hellbender, mudpuppies are listed as a species of special concern in North Carolina, which makes it illegal to harm, collect, possess, transport, sell one or attempt to do so.

Anyone who finds a mudpuppy is asked to leave it alone but to note the location (physical location or GPS coordinates) and take a photo, if possible, and email that information to Lori Williams at [email protected] If anglers happen to catch one on hook and line, they should carefully remove the hook, if it is safe to do so without harming the animal, or cut the line as close as possible and return it back to the water. People can also call the Commission’s Wildlife Interaction Helpline (866) 318-2401 to provide details of the observation.

This announcement was published with the permission of the North Carolina Wildlife Resources Commission. You can view the original post here.