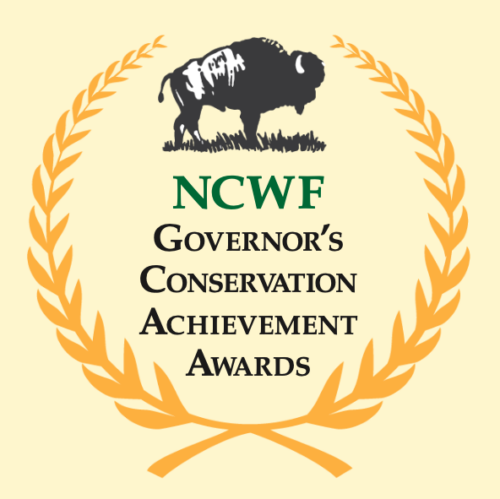 N.C. Wildlife Federation will honor the 19 award recipients, including the to-be-announced wildlife enforcement and marine patrol officers of the year, at a banquet on Saturday, Sept. 10, in Cary.

“For nearly 60 years, the awards program has been bringing together conservationists from across the state working to protect wildlife, air, water and land. This year’s conservation heroes are land stewardship champions, water advocates and leaders in preserving unique ecosystems,” said T. Edward Nickens, awards committee chair.

“The annual awards are a chance to highlight positive wildlife conservation efforts around the state while inspiring others to become more active in protecting North Carolina’s natural resources for future generations.”

The University of North Carolina Wilmington biology professor’s teaching, research and fieldwork have spurred innovative conservation and wildlife management practices and led to discoveries in ornithology, ecology and biology.

Dr. Parnell’s involvement with a coast-wide population count of more than 20 species of nesting waterbirds helped preserve and restore flocks of native coastal birds, including the once-endangered brown pelican.

Additionally, his assessment of nesting habitats for waterbirds revealed the benefits of using dredged sand to create and restore nesting habitats, leading the U.S. Army Corps of Engineers to modify its dredged-material disposal methods.

Other contributions include mentoring many of North Carolina’s most eminent conservationists and collaborating on dozens of articles, chapters and books on indigenous winged and mammalian wildlife.

Jeff Hunter spent 20 years in telecommunications before an Appalachian Trail thru-hike inspired him to follow a new career path in wildlife conservation.

Outdoor experiences seamlessly weave throughout Wes Seegars’ personal and professional life. The avid and lifelong sportsman and 25-year commissioner of N.C. Wildlife Resources Commission has a deep passion for the outdoors and commitment to wildlife conservation — from hunting to fishing to boating.

He works with diverse stakeholders and interests to ensure all hunters, anglers, boaters and outdoor enthusiasts have opportunities to enjoy wildlife-associated activities while also supporting ethical engagement in natural resources, safeguarding the state’s hunting heritage.

As owner and manager of properties in Wayne and Hyde counties, Seegars welcomes guests ranging from skilled game species hunters to casual wildlife watchers while providing opportunities for youth, people with disabilities and new hunters.

From ecologically significant mountains to working farms in the valleys, Eric Hiegl loves exploring North Carolina’s diverse landscapes. His commitment to conserving the state’s natural resources guides him in his role as director of land protection and stewardship for Blue Ridge Conservancy.

Grandfather Mountain, Elk Knob, Three Top Mountain and Pond Mountain are among North Carolina’s treasures known for their spectacular views. Hiegl was instrumental in protecting these significant natural resources – and dozens of tracts along the Blue Ridge Parkway – through land acquisitions and easements.

His seven-year pursuit and purchase of Paddy Mountain was filled with twists and turns but ended in conserving 152 acres. Hiegl also played a pivotal role in creating the Middle Fork Greenway, a multi-use trail that connects Boone and Blowing Rock.

Growing up on a family farm in Franklin County, Alton Perry learned first-hand the importance of thriving food systems, protecting biodiversity and conserving natural resources. That understanding and passion for conservation and forest management led him down a career path of helping other family forest owners in diverse communities become successful stewards of their own natural resources.

For Tom Roller, being a conservationist isn’t just about protecting coastal marine resources for future generations. It’s also about having practical fisheries management processes to ensure fish stocks remain healthy and abundant for ecotourism, personal consumption, catch and release, and anyone who uses public trust resources.

As owner and operator of Waterdog Guide Service, Roller spends about 200 days a year on the Crystal Coast, where he takes people fishing, teaches them how to be better anglers and educates them about the importance of conservation.

The working waterman also has extensive knowledge of North Carolina’s aquatic species, coastal ecology and waterways, and state and federal fisheries policies and issues. He serves on numerous finfish and shellfish committees for the North Carolina Division of Marine Fisheries and the Mid-Atlantic and South-Atlantic Fisheries Management Councils.

While Daniel works in partnership with many agencies and organizations, she’s the only educator on staff in her division. As such, her work reaches hundreds of teachers and nonformal educators and thousands of North Carolina students.

In April, she coordinated an Earth Day celebration stream cleanup with Wake County Big Sweep for N.C. Department of Environmental Quality employees at John Chavis Memorial Park in Raleigh. During the event, Gov. Roy Cooper, state leaders and volunteers removed 3,018 pounds of trash in and near the stream running through the 28.87-acre site and downtown Raleigh.

The conservation-minded teen is dual-enrolled at Terry Sanford High School and Fayetteville Technical Community College and is also part of a research team at Fayetteville State University. Additionally, she used money she made babysitting to start a turtle-focused nonprofit.

This year, the organization teamed up with N.C. Wildlife Federation, N.C. State Extension and N.C. Forest Service on a pilot program to eradicate invasive Bradford pear trees from the Southeast. Bradford pears threaten the balance of environmental biodiversity by outcompeting native grasses, wildflowers, shrubs and young trees that wildlife and pollinators depend on.

Through the Bradford Pear Bounty NC program, the council helped distribute 250 native trees to replace the Bradford pears homeowners removed. Council members used the bounty program to educate communities on the importance of planting a diversity of native species to support wildlife populations. They also plan to expand the program to other parts of the state.

After coming into office in 2019 as an appointee, it wasn’t long before Sen. Jim Perry made his mark on North Carolina’s General Assembly as a champion for his district and eastern North Carolina.

While his background is in health care management, Sen. Perry strongly advocates for farmers, agriculture and agribusiness in rural communities. The retired businessman who grew up in Kinston has supported measures to use North Carolina’s natural systems and resources to protect communities from flooding and other challenges.

As the primary sponsor of the Flood Resiliency and Prevention Act, Sen. Perry partnered across the aisle to ensure a budget bill that made historic investments in community-centered disaster recovery and resiliency measures.

Perry also supports preserving family land, whether it’s a generations-held farm or town lot. To protect landowner rights, he sponsored legislation that would allow North Carolinians to implement procedures to better support the ability of families to participate in decision-making that impacts their lands.

It’s not just slices of homemade pie or quiche customers savor at Maxie B’s; they also delight in the pieces of natural paradise found just outside. Owner Robin Davis transformed the bakery and dessert cafe’s patio into a Certified Wildlife Habitat to connect customers to the natural world. Surrounded by a sea of pavement, the patio is an oasis of native plants and habitats that attracts birds, butterflies and other pollinators.

A founding member of Triad WILD! community wildlife chapter who volunteers with several committees, Davis also donates baked goods to nature and environmental events, hosts a native plant festival, advocates for the removal of invasive plant species, and supports the “Lights Out” campaign for birds and other wildlife during migration periods.

Additionally, Davis helped educate government officials on the importance of native plants in communities. She was instrumental in Greensboro’s adoption of a proclamation for Native Plant Week – the first city in North Carolina to have its own.

For the last 14 years, Todd Ewing has been swimming in efforts to conserve and manage North Carolina’s rare and imperiled aquatic species. Until his retirement this year, he led N.C. Wildlife Resources Commission’s Aquatic Wildlife Diversity Program and served as assistant chief of the Inland Fisheries Division.

In those roles, Ewing worked on updating the listing process for N.C.’s protected animals, directed a partner coalition to develop safe harbor and conservation agreements for 22 aquatic species, and helped expand and reintroduce rare fish and mussel species.

Most recently, he collaborated with U.S. Fish and Wildlife Service in developing an innovative approach to augmenting and reintroducing stocks of federally threatened and endangered aquatic species to facilitate their eventual recovery and delisting.

As program coordinator for the Southeast Aquatic Research Partnership, Ewing now works with natural resource and science agencies and conservation organizations to strengthen aquatic resources in the Southeast.

However, their most significant volunteer work has been for the N.C. Department of Agriculture’s Plant Conservation Program. For the past decade, they’ve worked as preserve stewards for the Friends of Plant Conservation, monitoring and caring for five rare plant preserves.

During that time, they significantly augmented the federally and state endangered smooth purple coneflower population by growing it from seed at home, then planting those plants back into the preserves where the seeds originated.

As co-founder and president of Friends of Lower Haw River State Natural Area since 2016 and an active member of multiple conservation organizations, Smith has written and applied for grants resulting in infrastructure improvements at public river access sites, kiosks with educational signage, shade shelter with nature murals, and improved pathways.

Recently, Smith was the catalyst for forming the Haw River Trail Steering Committee, which represents town and county governments, state agencies, land trusts, and trail and paddle organizations. She also helped secure a grant for a trail corridor feasibility study and economic impact analysis. The project will lay the groundwork for the construction of a Haw River Trail in Chatham County that connects to a regional Haw River Trail network.

What started as a community petition to help struggling turtles navigate hardened structures around Carolina Beach Lake has evolved into a fully engaged community wildlife chapter dedicated to preserving habitat and wildlife throughout the Lower Cape Fear region.

Mainspring Conservation Trust is dedicated to conserving land, forest and farms, restoring water, and connecting people to the heritage and natural resources of the Upper Little Tennessee and Hiwassee River Valleys.

Through partnerships with federal, tribal and state agencies and affiliations, Mainspring has helped conserve more than 29,000 acres in this nationally significant region. The partnerships support ecosystems and native aquatic species that help provide clean water, outdoor recreation and a stable economic base for watershed citizens. In 2021, Mainspring partnered with NCWF on two significant stream restoration plantings to increase shore stabilization and wildlife habitat.

Mainspring helps farmers improve their pastures and benefit the fish and ecosystems that rely on them by facilitating restoration complexities. In 2021, the organization conserved 1,200 acres, including five new conservation easements, and restored 1,600 feet of streambank by planting shrubs and trees. The trust also held 43 hands-on educational and community activities, including trash cleanups, fish-based biomonitoring surveys, snorkeling events and other programs to help kids experience their natural surroundings.

RSVP and reserve seats. The early bird price is $75 through Aug. 1.

Posted in Awards, News & Press Releases
Back to News / Blog

It’s Time to Plan! August is National Make a Will Month