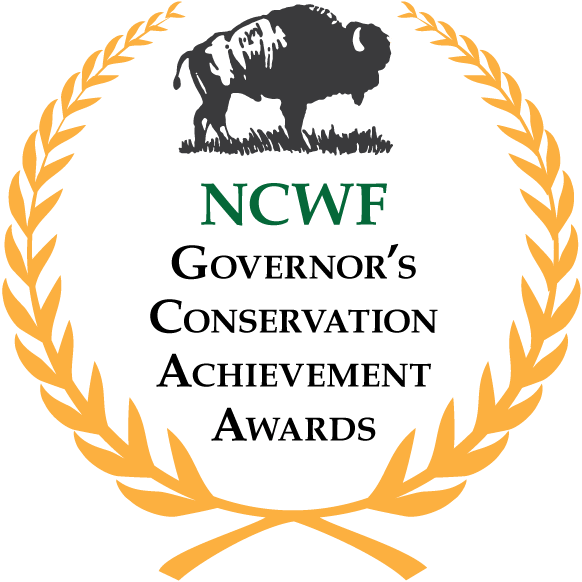 The North Carolina Wildlife Federation has announced the winners of the 54th Annual Governor’s Conservation Achievement Awards. The full list of award winners and categories is below.

This year’s winners are exceedingly notable conservation devotees who work for wildlife from elk to amphibians to fish and marine resources. They are water quality advocates, land stewardship champions and leaders in the preservation of unique ecosystems. The award winners include agency professionals, elected officials, academia, non-profit leaders and organizations rising to the challenge. Call us at (919) 833-1923 to reserve your seat at the Awards banquet.

The North Carolina Wildlife Federation first presented its conservation awards in 1958. “Each year we are amazed at the commitment and creativity of North Carolina citizens in protecting wildlife and wild places,” stated T. Edward Nickens, NCWF Awards Committee Chair. “Many of our award winners tell us their Governor’s Conservation Achievement Award represents the high point of their career—whether they are full-time scientists or full-time volunteer conservationists.”

These prestigious awards are the highest natural resource honors given in the state. By recognizing, publicizing, and honoring these conservation leaders—young and old, professional and volunteer—the North Carolina Wildlife Federation hopes to inspire all North Carolinians to take a more active role in protecting the natural resources of our state.

Award winners are nominated by the citizens of North Carolina and decided upon by a committee of scientists, environmental educators, and conservation activists. “This awards program brings together a remarkably diverse group of conservationists to highlight the ‘good news’ about wildlife conservation in North Carolina,” said Nickens, “Our primary focus is to applaud and honor these people who work so hard for wildlife and the air, water, land, that they and all of us depend upon”.

Master Officer Jones is the epitome of a wildlife officer. A hardworking and dedicated officer, Jones excels in his investigative work being particularly good at detecting egregious acts that jeopardize the state’s natural resources or threaten public safety. While investigating a poaching ring, he uncovered a massive drug lab. He, along with other law enforcement agencies, arrested the suspects, who have since been indicted on numerous felony charges.

Don Lee and his family have turned their family farm into a real-time laboratory and a growing business based on researching and cultivating native seeds. They are leaders in providing technical experience and seed sources for native grasslands and Southern prairie plantings.

From restoring wetlands, streams and river systems to establishing greenways and removing dams, the non-profit Resource Institute fosters collaboration and innovation while working for functioning ecosystems and water quality. One example of its work is the Ararat River restoration effort near Mt. Airy that turned a muddy river into a delayed harvest trout waterway with conservation easements and miles of greenway construction.

As a fish biologist for the National Marine Fisheries Service, Rohde is a staunch defender of freshwater, estuarine, and marine resources. He is known for his work on Cape Fear River fish passage and the Roanoke River fish restoration plan. Currently serving as president of the North American Native Fishes Association, Rohde’s many publications and volunteer work well describe the uncommon breadth of his contributions to fish resources.

In the face of wetlands research elimination in agency budgets, scientists and biologists formed CWA to increase public awareness and appreciation of wetland ecosystems and their vital functions for habitat, water quality through filtration, and flood control. The group quickly became a leader for policy and technical expertise across the Carolinas. CWA’s Wetland Treasures program highlights important wetlands and includes public field trips generating much interest with other conservation groups and the public.

Building community for conservation is the hallmark of this wildlife chapter. Over the last year, the group has built and deployed nesting boxes, heron rookeries, and osprey nesting platforms while stabilizing shoreline habitat and establishing fish habitat in and around the largest aquatic ecosystem in the state. The chapter coordinates an island habitat program and provides a robust community education effort via its popular programs, wildlife boat tours and events.

Joe Darden has instructed tirelessly through the years amassing over 2,500 volunteer hours teaching hunter education courses and related events. Darden is recognized as a pioneer and champion of hunter education, setting a remarkable example of dedicated volunteer service.

As a lifelong friend of fish and wildlife resources, and an avid fisherman and waterfowl hunter, Funderud has supported countless fishing events for youth, veterans, and the physically and mentally challenged. He has held many leadership roles with the Western North Carolina Muskie Club including his service as president, treasurer and event coordinator, providing fishing opportunities for many people that would not otherwise have them.

Protecting drinking water for the citizens of Maggie Valley in Haywood County, the MVSD has a vision and a serious commitment to watershed conservation. It works with partners to conserve on the or to preserve 2,000 acres that it owns and manages in the Campbell Creek watershed, and is spearheading the establishment of a nearly 3,000 acre gameland to protect elk and the Jonathan Creek watershed.

Sutton is the Blue Ridge Program director with The Nature Conservancy. Through her work, thousands of acres of forests have benefited from prescribed burning and restoration. Sutton leads TNC’s collaborative efforts on the forest management plans for 1.1 million acres of national forest in western NC. She was recently appointed to the National Advisory Committee for the Implementation of the National Forest System Land Management Planning Rule.

Representative Yarborough is a champion for public trust resources, wildlife, and sporting issues. His staunch support for marine fisheries management and conservation leads the charge for reform and brings to bear the serious issue of fish stock decline in North Carolina coastal waters.

North Carolina lost a true conservation champion with the passing this year of Sean O’Donnell. O’Donnell was an avid sportsman whose enthusiasm for sharing, volunteering, and practicing in all things outdoors was boundless. At an early age he began volunteering with groups like Quality Deer Management and NC Bowhunters Association. He also led efforts to feed the needy with venison and participated in hunter education events and youth hunting and fishing days.

As the founder and executive director of the Plastic Ocean Project, Bonnie has researched and collected plastic marine samples globally. She developed her work into an art initiative to highlight the problems, which has now traveled over 4,700 miles. She shares her wealth of knowledge on marine debris pollution and prevention solutions in her tireless efforts to engage consumers on decisions they make and how those decisions are connected to fish and wildlife impacts.

Upon constantly witnessing children flounder due to absences, lack of motivation and learning disabilities in her Title 1 school, this school counselor spearheaded an award-winning nature trail in the woods surrounding her school. Bringing environmental education to the forefront of the school, the trail now has a guide with dozens of trail markers, a covered outdoor classroom and a butterfly garden. She has fostered activities such as gardening, composting and recycling, making them a regular part of the school culture and integrating them into classroom learning.

As her Asheville community was plagued with health issues from cancer, tumors, and glaucoma, Smith became a fierce advocate upon learning her young son also had cancer. Neighbors had uncovered contamination and had been fighting with the EPA to hold CTS accountable for the toxic pollution for decades, and in 2009 Lee Ann joined the fight with fresh ideas and energy. In 2012, she co-founded the POWER Action Group NC to advocate for the cleanup of the contaminated site, finally prevailing when the EPA ordered to have the toxic Superfund site cleaned.

As the Forest Research Operation Manager for the N.C. Department of Agriculture and Consumer Services, Schnake is responsible for more than 25 land projects spanning 17,000 diversely forested acres. Developing comprehensive land conservation and restoration planning for shortleaf pine and oak savanna ecosystems are among Schnake’s studies and efforts. His expertise has furthered the sustainable management and conservation of longleaf pine forest ecosystems.

A lifelong hunter and angler, Gant spearheaded an effort that took a new approach to marine resource conservation. Rather than fighting over how to re-allocate a shrinking resource, he supports reforms that would grow the number of fish for all by taking a conservation based approach to fisheries management with a focus on the economic benefits. Through his efforts, the debate on fisheries management reform has shifted to conservation, providing a possible path to resolving this decades-long dispute.

Hall is coordinator of the Partners in Amphibian and Reptile Conservation program as a biologist with N.C. Wildlife Resources Commission, and served as president of the N.C. Herpetological Society. Respected for his work on ephemeral pool creation for Carolina Gopher frogs and bog turtle swamps, and for research on the last remaining populations of eastern Diamondback rattlers in the state, Hall also excels in leading citizen science research.

A life-long wildlife and conservation giant with a huge impact on North Carolina’s landscape for more than four decades, Hamilton served North Carolina’s wildlife agency as Statewide Wildlife Research Project Leader, Chief of the Division of Game, and Chief of the Division of Inland Fisheries before his promotion to Deputy Director in 1986 and subsequent role as Executive Director from 2004 until retirement in 2007. Hamilton has worked for all wildlife species, game and nongame alike, and now advocates for them and for sporting and outdoor heritage issues.

Detailed award winner information and images will be provided after the September 9th banquet at which award winners will receive their certificate and handsome trophy.

Posted in Awards
Back to News / Blog