North Carolina Wildlife Federation (NCWF) is proud of our newest partnership with the Eastern Band of Cherokee Indians in Cherokee, North Carolina. Earlier this year, NCWF was introduced to David Anderson, the tribe’s lead horticulturist, and a partnership was forged.

While the tribe grows a number of plants on their property for restoration projects,  there is still a need for hickory trees, which are culturally significant to the Cherokee tribe. NCWF purchased and helped plant 120 hickory trees (most in seven-gallon buckets) including five different native species such as mockernut and shagbark.

Hickories benefit wildlife substantially, they are also culturally very important. For example, Cherokee citizens use hickory wood for stickball sticks. Cherokee Stickball, colloquially called Indian Ball, is a mix of lacrosse and football. It is played on a field with two goal posts set on opposing ends with a minimum of twelve men per team.

Although Stickball is now played recreationally with several community teams throughout the Cherokee reservation, Stickball was historically an alternative to war and a way to settle disputes among tribal factions. Tribal member, Micah Swimmer, explained that Stickball is reserved for men in the tribe, as women are seen to have immense power and therefore must reserve their energy for themselves and allow the men to harness their own strength during the Stickball matches.

Stickball sticks are made from a single long piece of hickory without the bark, that has been split and carved, sometimes up to six feet long. The stave is soaked in a creek where it softens for several days, and then bent into shape for the stick. It usually takes 10-15 years for the hickory trees to grow tall and wide enough for the branches to be suitable Stickball sticks. These sticks are also made for children learning the sport. Tribal members emphasized that their new hickory groves will be sustainably managed to last centuries for future generations of wildlife and tribal members alike. 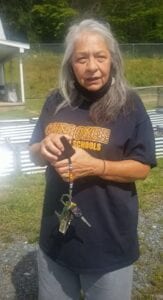 In addition to its other uses, Cherokee tribal member, Jeanne Burgess, shared that hickories are also used in cooking including the creation of hominy. Homemade hominy takes almost a full day to make. It is corn-based combined with hickory ash (lye), unique to the Eastern Band of Cherokee Indians. Hominy is usually eaten with traditional Cherokee style meals and is a highly cherished, traditional dish. Kanuchi, or hickory nut soup (sweet drink), is another specialty dish of the Cherokee, created from ground hickory nuts.

NCWF is honored to partner with the Eastern Band of Cherokee Indians for this tree planting at the Birdtown Community center and the Kituwah Mound Mother Town site while forging a long-term partnership for conservation and culture.

Anderson agrees. “The EBCI Natural Resources program is grateful for this partnership with NCWF. Accomplishing projects like this create a lot of excitement, community engagement, and helps put information out to the public on why it is important we continue to do this type of work. We hope we can continue to partner with NCWF on similar projects that lead to ecological restoration and cultural preservation. It is important to recognize that Indigenous peoples were the original stewards of the land, and that continued efforts such as this, lead to sustainable landscape models.”