Skunks of NC: Spotted and Striped 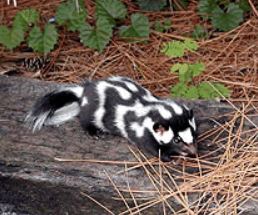 Skunks, infamous for their stinky defense mechanism, are mammals native to North America. There are four skunk species in the Americas, with two occurring in North Carolina. The spotted skunk is a resident of the mid-to-upper level mountains of North Carolina and the striped skunk is found statewide.

Eastern spotted skunks are identified by black fur interrupted by patterns of white stripes and spots across their bodies. The Eastern spotted skunk has declined by 90% since the 1940s due to habitat loss and other factors. Little is known about this species due to its elusive nature, but there have been recent efforts to change that, including a partnership between NCWF’s Mountain Wild! Chapter, Warren Wilson College and the NC Wildlife Resources Commission to build and install spotted skunk hair snares. These snares could help pinpoint the range and population of spotted skunks and aid in conservation efforts. The project was put on hold due to COVID-19, but will tentatively recommence in 2021.

Striped skunks are more common. Named for two white stripes of varying sizes that run from the head, down the back and to the tip of the tail, these skunks can be easy to recognize.  Additional identification features include their triangular heads, bushy tails and beady eyes. 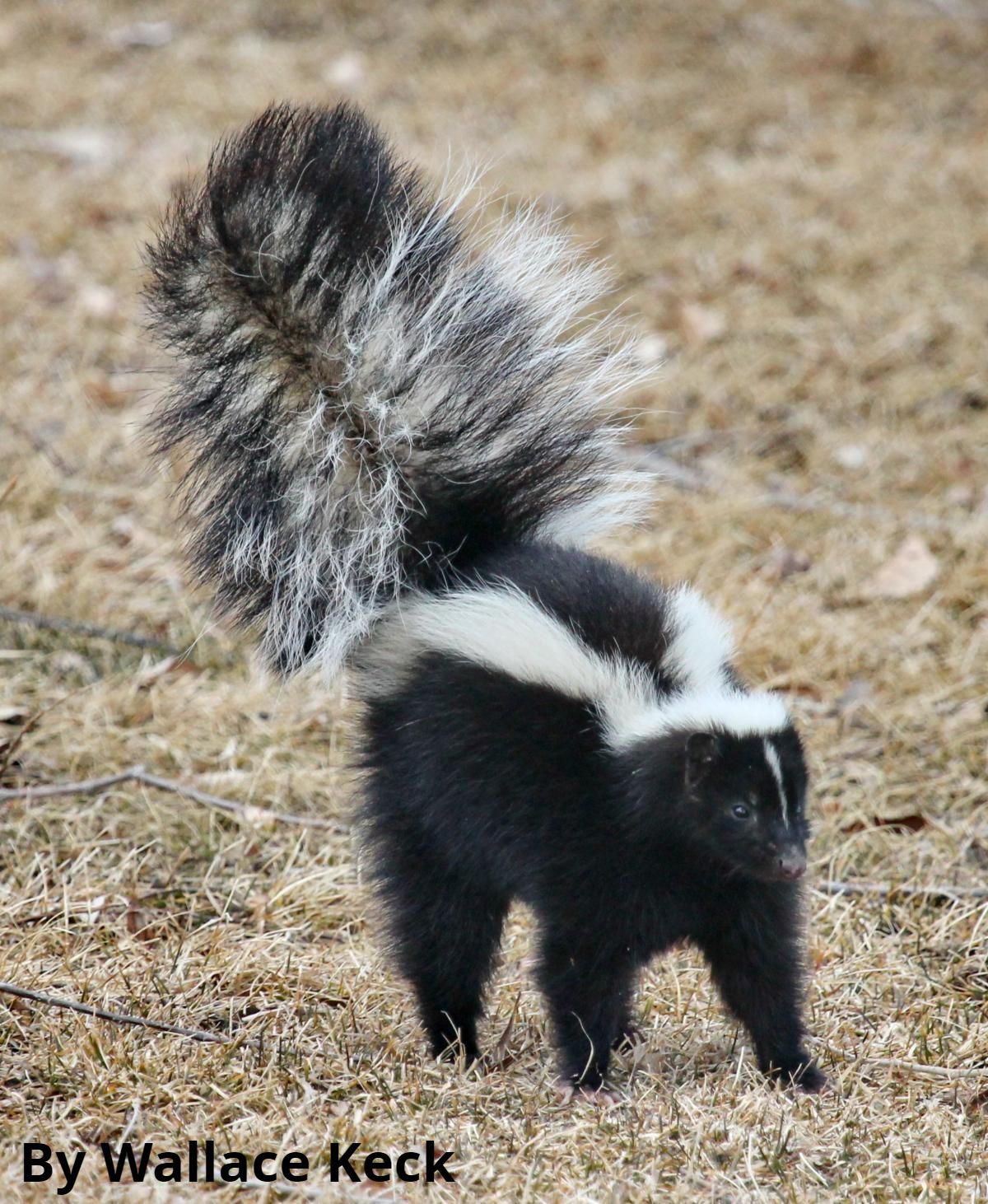 If you see a skunk in the wild, proceed with caution. These animals are well-known for the musky, tenacious substance that they spray when threatened. This natural chemical defense emits from two glands on the hindquarters and  effectively deters predators, as it can cause temporary blindness and leaves a lingering foul odor.

Striped skunks occur in habitats consisting of mixed woods or brush and open fields, although they prefer areas that offer easy access to water sources. Striped skunks will dig into the slope of hills to create dens where they spend most of the day, typically emerging at dusk or dawn. Rather than hibernating during the winter, skunks become dormant and overwinter in their dens.

Come early spring, male striped skunks begin searching for a mate and often partner with several different females in the same breeding season. The breeding season runs from mid-February to mid-April, producing litters of 5 to 9 kits that are born from May to early June.

At two months old, the kits will follow their mother hunting. Skunks are omnivores, with nearly 80% of their diets consisting of insects, worms, small rodents, bird eggs and reptiles, supplemented by berries, acorns and vegetation. Skunks benefit the ecosystem, and people, by consuming a large number of pests including mice, voles, moles, beetles, worms and grubs.

While they are not frequently hunted, skunks are affected by people in other ways, such as habitat loss, wildlife-vehicle collisions and poisoning. Striped skunks are subject to regulated hunting and are considered a small mammal game species.

These skunks, like many wild animals, can thrive in suburban and urban areas. You can peacefully coexist with skunks by taking basic precautionary steps such as securing garbage, covering compost piles and feeding pets indoors. Securing crawl spaces can prevent skunks and other wildlife from creating dens beneath your house, garage or shed.You can learn more about coexisting with wildlife in your yard by watching this fantastic presentation by Dave Mizejewski, hosted by NCWF’s HAWK (Matthews) chapter.