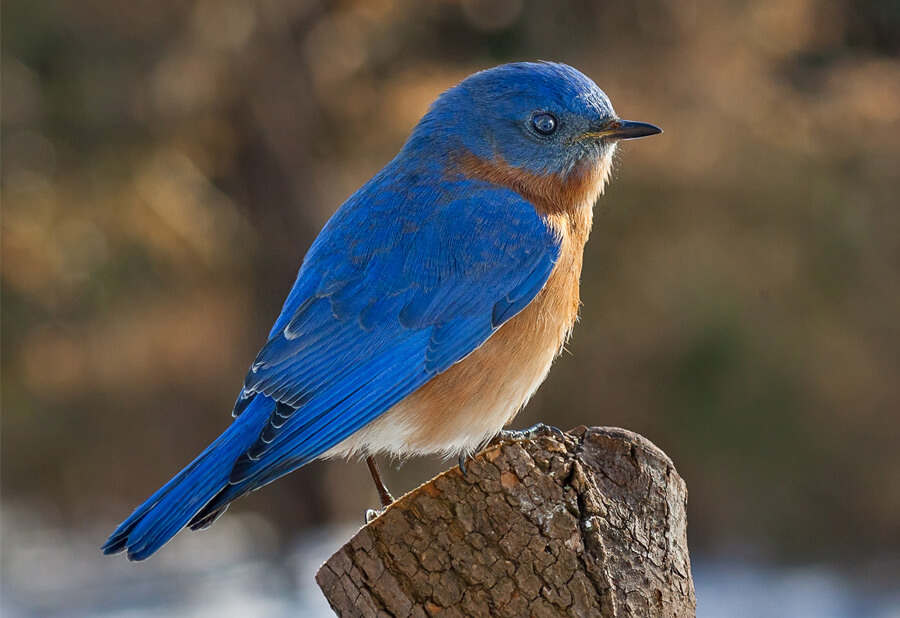 January 29, 2021
Many bird species are beginning to scout potential nesting sites for the approaching breeding season.
That means that now is the time to erect new nest boxes or tidy up your old ones by clearing them out and inspecting the box for damage. Ideally, your nest boxes should be ready for new or returning tenants by mid-February.
Bluebirds are one of several species that prepare for spring by looking for a mate and locating a nesting site. These cheerful birds are a reminder of the huge impact that backyard habitats can have on wildlife’s survival in a changing landscape. In the 1970s, bluebird populations declined by 90 percent as European starling and house sparrows took up available nesting sites and they ate insects contaminated with the chemical pesticide DDT. 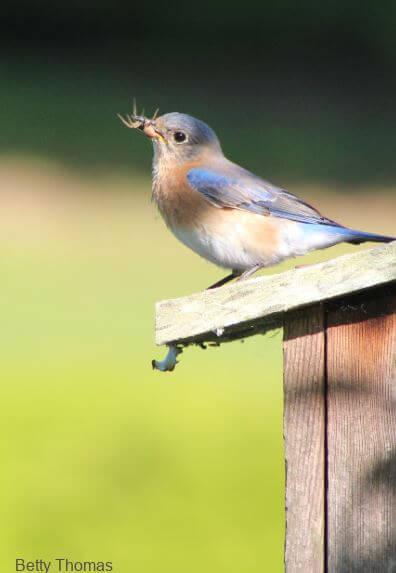 A massive public effort to provide and tend nest boxes for bluebirds led to a solid rebound of the species, which is now abundant, according to a recent webinar on Eastern bluebirds hosted by NCWF’s Charlotte Wildlife Stewards chapter with Martina Nordstrand.

Bluebirds are cavity nesters that move into old or abandoned woodpeckers nests, but they will also readily utilize nesting boxes.  Bluebirds live in grassland habitat or woodland openings with little understory vegetation, and can often be seen perching on posts, wires or native plants, looking out over open prairie or pastures. They forage on the ground for insects and berries.

You can attract a breeding pair to your yard by erecting new nesting boxes or cleaning out old ones.  To ensure that your box is suitable for a pair of bluebirds, look for one with a 1 ½ inch hole and secure it to a pole with a guard attachment. The guard will help protect eggs and nestlings from predators such as squirrels, snakes and other wildlife.

The royal blue plumage on their backs and wings makes these birds easy to spot. While the  royal blue feathers are their most notable feature, they also sport a rust-colored breast that mixes into white feathers on the belly. The males are often brighter in coloration, while the females’ colors are subdued.

Males help gather materials for the nest, while the female does most of the nest-building and incubating. If you peer into your nesting box and see pale blue eggs, you can rest assured that you have bluebirds in there. A clutch of eggs that are not blue may belong to a native songbird such as a chickadee, or possibly an invasive house sparrow.  While songbird eggs and nests are federally protected from disturbance, house sparrow eggs are allowed to be removed and destroyed. Bluebirds may use the same nest for multiple broods throughout the summer or move into your bluebird house after other songbirds have fledged from it.

You can attract bluebirds to your yard by providing suitable nesting habitat and filling your feeders with their favorite snacks: mealworms and suet.

Posted in Education, Habitat, Wildlife
Back to News / Blog