North Carolina Wildlife Federation has made the difficult, but correct, decision believing it is in everyone’s best interest to cancel the 2020 Governor’s Conservation Achievement Awards Banquet due to the COVID-19 crisis.  We expect challenging conditions that will complicate the hosting of this prestigious event. Our priority is the health, safety, and well-being of our award winners, guests, sponsors, staff, board, and elected officials. We look forward to hosting the 57th year of the Awards program next year, and continuing to honor the best of the best in conservation.

This year's winners are exceedingly notable conservation devotees who work for wildlife from elk to amphibians to fish and marine resources. They are water quality advocates, land stewardship champions and leaders in the preservation of unique ecosystems.  The award winners include agency professionals, elected officials, academia, non-profit leaders and organizations rising to the challenge.

The North Carolina Wildlife Federation first presented its conservation awards in 1958.  With the approval of the Governor, the annual program was designated as the Governor’s Conservation Achievement Awards – the highest natural-resource honors given in the state.  “This awards program brings together a remarkably diverse group of conservationists to highlight the ‘good news’ about wildlife conservation in North Carolina,” said Awards Committee Chair, Eddie Nickens. “Our primary focus is to applaud and honor these people who work so hard for wildlife and the air, water, land, that they and all of us depend upon.”

Awards were presented to the 2018 winners on September 7th in Cary.

View pictures from the Awards banquet.

If you are interested in becoming a sponsor of the Awards Banquet, please contact Dom Canavarro at dom@ncwf.org or (919) 833-1923, or make a Sponsorship Gift online.

Conservationist of the Year -  Wilson Laney (Raleigh)
Dr. Laney turned a childhood interest in fish and wildlife into a 39-year career with the U.S. Fish & Wildlife Service dedicated to the conservation of fish, wildlife and their habitats. His career can only be described as illustrious, with widespread recognition for his leadership on a diversity of conservation issues including hydropower relicensing, striped bass conservation, and the interstate management of marine fish populations. His broad knowledge of biological resources and commitment to their conservation continue to generate a strong demand for his guidance and participation in numerous scientific councils and conservation organizations.

Wildlife Conservationist of the Year – Debbie Roos (Sanford)
Roos is an Agricultural Agent for the Chatham County Center of N.C. Cooperative Extension whose professional focus is supporting small farmers in the area and hosting educational seminars and field days on sustainable agriculture. In her early work to support beekeepers, she became aware of the more than 500 native bee species in the state, changing her career trajectory. Her position has grown to include support for the wider audience of gardening and wildlife enthusiasts, which culminated in the establishment of the Pollinator Paradise Garden in Chatham County.

Sportsman of the Year – Rocky Carter (Swansboro)
Passionate about hunting and fishing, Carter epitomizes paying it forward by working for better management and enforcement of rules for fish and wildlife. Carter works to engage youth in fishing, spearheads Wounded Warrior events, and champions habitat restoration projects. He relishes and practices the responsibility as a sportsman to make sure our public trust resources are there for future generations to enjoy.

Land Conservationist of the Year – Three Rivers Land Trust (Salisbury)
As a reputable and dynamic land conservation organization, Three Rivers Land Trust has conserved thousands of acres of land for the benefit of wildlife, habitat protection, water quality, cultural significance, and the public. Not only does the land trust raise funds to protect lands for ecological purposes, but this organization values and implements unique ways to connect the public with natural resources, such as through its Sportsman Access Program.

Water Conservationist of the Year – Coharie Tribe (Clinton)
After hurricanes and decades of neglect closed off access to the Coharie River, a cultural and community touchstone for this southeastern North Carolina tribe, Native American leaders marshalled grant funding, community involvement, academics and scientists to help clear the river for small-scale boat navigation, and reconnect the tribe to its ancestral waters. Bringing together cultural, historical, and natural assets, the tribe dedicated three years and 5,000 volunteer hours to restore access to the river.

Environmental Educator of the Year – Lily Dancy-Jones (Asheville)
This high school biology teacher has elevated pollinator habitat and awareness in the Asheville area by connecting students, community members and local businesses. Dancy-Jones was encouraged by pollinator efforts in urban Asheville, but the lack of interest and action for pollinators and habitat conservation in surrounding rural areas troubled her. She founded an Eco Club at the high school where she works, coordinated workdays to establish several gardens through grants on school grounds- complete with native flowers, “bee hotels” and educational signs- and chairs the steering committee of Youth for Environmental Stewardship in Asheville.

Legislator of the Year – Carla Cunningham (Charlotte)
Representative Cunningham is the House minority whip. An avid angler, she is in her 4th term in the General Assembly, and has proven a steadfast champion for wildlife and habitat. Cunningham sponsored bills to revamp coastal marine fisheries management and licensing, and led the chorus within her caucus and the wildlife committee on the way to successful passage of fish reproduction legislation.

Marine Resources Conservationist of the Year – Larry Yarborough (Roxboro)
Fully understanding the value of and opportunity for North Carolina’s marine fisheries to be the envy of the Atlantic and Gulf Coast states, this avid fisherman worked tirelessly for marine fisheries reform. Knowing first-hand the great fishing in Mississippi and Florida that came out of reforms, Yarborough, undeterred by previous failed attempts in North Carolina, focused on the resource to help pass historic legislation in the House.

Wildlife Volunteer – Larry Capps (Gastonia)
An avid sportsman and wildlife enthusiast, Capps leaves his conservation mark wherever he goes. He has transformed hundreds of acres into wildlife sanctuary, has led the charge in installing wood duck boxes, osprey platforms, pollinator gardens and fish attractors to promote healthy wildlife and habitat, in Gaston County and beyond. Capps is tireless in his efforts to promote conservation and getting youth and others involved in the outdoors.

Public Lands Conservationist of the Year – NC Chapter of Backcountry Hunters & Anglers
Established in April of 2018, this state chapter of the North American public lands advocacy organization has been a whirlwind of conservation action. Kicking off its charter with a mountains-to-sea pint night tour of the state, NC-BHA has engaged in statewide public lands cleanups, led campaigns to contact state legislators, created a fund to aid fishing and hunting guides impacted by Hurricane Florence, and created a deeply active and vital network of public lands advocates across the state.

NCWF Chapter of the Year – Charlotte Reconnecting Ourselves with Nature (CROWN) (Charlotte)
From leading family nature walks to organizing community paddling events, this dedicated group has led the way for environmental awareness and wildlife conservation in Charlotte. Celebrating its fifth year as a wildlife chapter, CROWN achieved recognition of Charlotte as a Community Wildlife Habitat, installed several pollinator gardens in schools and created venison recipe kits for those in need in Mecklenburg County.

NCWF Affiliate of the Year – North Carolina Herpetological Society
As a strong advocate for amphibians and reptiles, the NC Herpetological Society specializes in providing science-based information, research, and educational opportunities to working professionals, its members, and the public. This organization is dedicated to conserving North Carolina’s native species and biodiversity through on-the-ground herpetological work, including Project Bog Turtle and Project Simus, documenting the natural history and distribution of numerous species including the southern hognose snake, bog turtle, and eastern chicken turtle.

Natural Resources Scientist of the Year – Dottie Brown (Raleigh)
As a Senior Bat Ecologist at VHB Engineering in Raleigh, Brown’s research focuses on data collection and permitting related to numerous federal and state-listed species including northern long-eared bat, gray bat, and the Virginia big-eared bat. Brown has spent countless hours of research and field study uncovering the devastating effects of the White-Nose Syndrome on bat colonies. While her unwavering commitment to bats is a personal passion, she is also intensely interested in the conservation of northern flying squirrels, bog turtles, hellbenders, and peregrine falcons.

Forest Conservationist of the Year – Bill Kane (Cullowhee)
A longtime advocate for forest conservation, Kane served on the original forest management plan stakeholder team for the Nantahala-Pisgah national forests and is currently working on its updated plan advocating for wildlife and healthy habitats within that 1.1 million acres. Kane has been a long-time volunteer with the Nantahala Hiking Club Appalachian Trail maintenance crew and a leader in forest conservation and management for over four decades.

Conservation Organization of the Year – Cape Fear River Watch (Wilmington)
Improving water quality and protecting the Lower Cape Fear River Basin through education, advocacy and action, this group was at the forefront when dangerous levels of the emerging contaminant GenX were discovered in the river, and ultimately in the drinking water of hundreds of thousands in the Wilmington area. CFRW assisted with public meetings for residents, provided support for official inquiries and demanded full funding for the Department of Environmental Quality to address the issue. As a result, discharges of GenX have ceased and recovery efforts are being pursued.

Business Conservationist of the Year – Kellex Seating (Valdese)
Kellex Seating’s commitment to conservation is evident not only in its commitment to using recyclable and renewable materials in the manufacturing process, but also by its significant financial contribution to Valdese Lake Park to purchase 300 acres for a public recreational park. Taking it further, employees committed hundreds of hours towards cleaning up debris, removing invasive plants, installing pollinator gardens and improving wildlife habitat on the site of the future park.

Wildlife Enforcement Officer of the Year – Michael D. Paxinos (Kinston) This nine-year veteran is a well-rounded game warden with a consistent record of excellence. When Hurricane Florence ravaged his county, Master Officer Paxinos coordinated emergency response efforts and exceeded the call of duty by housing several officers for the duration of the response. More recently, Officer Paxinos procured potentially life-saving Narcan for the entire Law Enforcement Division after a fellow officer was exposed to fentanyl during a traffic stop. He works tirelessly to cultivate relationships across agencies, serves as a leader for younger officers and has been innovative with equipment and techniques.

Marine Patrol Officer of the Year – Malcolm Bryan Eure (Wilmington) Officer Eure is one of Marine Patrol’s most seasoned, skilled and exemplary officers due to his strong work ethic, professionalism and good character. Officer Eure volunteered his knowledge of his area, regulations and commercial and recreational fisheries to the Rules Advisory Team, dedicated extensive time and effort vetting new-hire prospects and participated in lease reviews to uphold the quality of NC coastal waters. He also earned a Life Saving Award recently for his quick thinking and vital intervention in administering a tourniquet to an injured man on Wrightsville Beach. He is a valued resource for fellow officers and maintains positive, progressive relationships with the larger communities of Wrightsville Beach and New Hanover County. 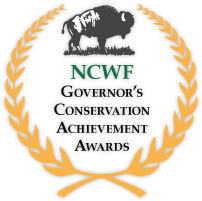 If you are interested in becoming a sponsor of the Awards Banquet, please contact Dom Canavarro at dom@ncwf.org or (919) 833-1923, or make a Sponsorship Gift online.