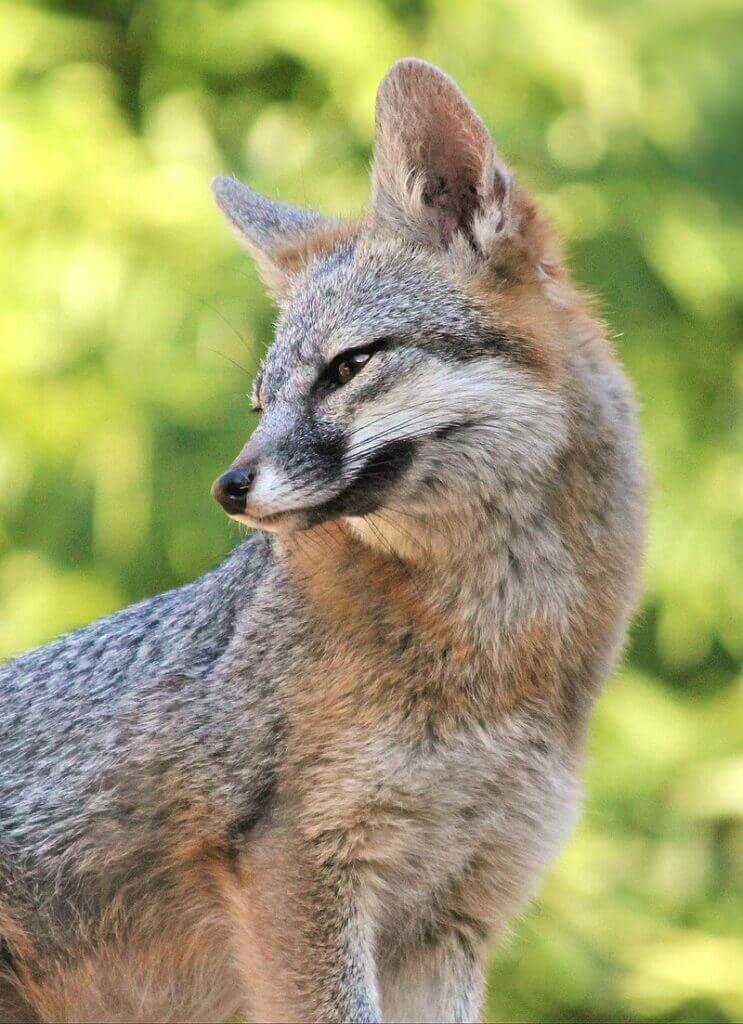 Gray foxes are North Carolina’s only native fox and the smallest of the four wild canids that are present in the state, with the others being the red fox, red wolf and coyote. Highly adaptable to a variety of habitats, gray foxes can be found in forests, fallow fields, marshes and open woodlands with a range extending through southern, central and eastern North America.

The gray fox is sometimes confused with the red fox, but there are a few key differences that can help you identify the gray fox. Gray foxes have more gray in their coats and patches of rust-colored fur on the chest. The tip of the tail on a gray fox is black, while the tip of the tail on a red fox is white. Gray foxes also appear to be smaller than red foxes in stature. While the two actually have the same average weight, gray foxes have shorter legs and shorter fur which makes them appear smaller.

Gray foxes are most often seen or heard at night due to their nocturnal habits, but are occasionally seen during the day as they search for food or other resources. These furtive creatures mainly subsist on a diet of mice, birds and rabbits, but will also snack on seeds and wild fruit. Gray foxes are very agile and will often climb trees to catch prey.

During the colder months of January and February, gray foxes begin to search for a mate. Males likely mate with one female per year in winter and may choose the same partner for consecutive years. In the spring, the male and female select a den, typically in dense grasses, hollowed trees, or under small rocks, where a litter of 3-5 kits will be born. It is suspected that  both parents care for the young until fall or early winter, when the young foxes begin to disperse into new territory.

As the young foxes embark on this journey to establish new home ranges, some are unfortunately hit by vehicles. To avoid collisions with various wildlife, it is important to abide by the posted speed limit, be on the lookout for wildlife crossing signs and stay alert after dusk when several species are most active.

While foxes can contract rabies, fox-human interactions are very rare. To curb wildlife conflicts, it is important to avoid leaving open or unsecured pet food, compost, or garbage on your property, which often attracts opportunistic wildlife.