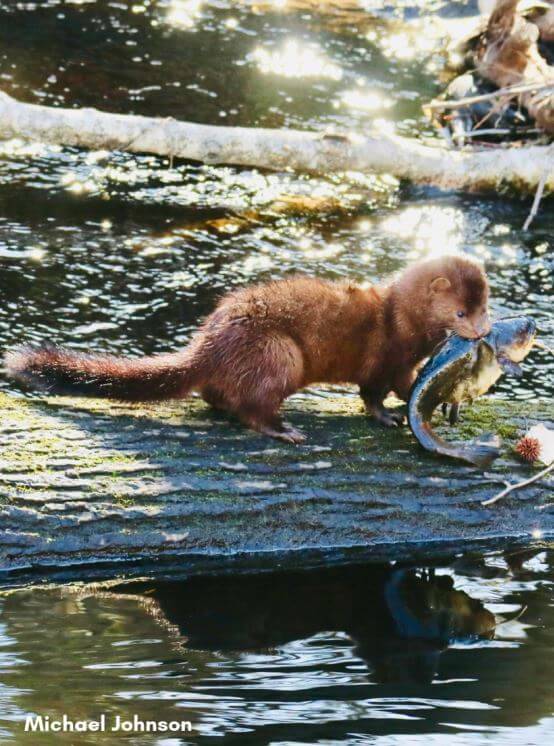 Minks (Mustela vison) are small mammals commonly found in wetlands across North America, with the exception of the arid regions of the southwest and northern parts of Canada. They have been found in every county of North Carolina, but are seldom seen because of their nocturnal lifestyle.

Minks are small, dark brown or black mammals with long bodies, short legs and pointed noses. Their slightly webbed feet make them efficient swimmers, but they also utilize terrestrial habitats for food or shelter. Minks are known for catching all sorts of prey, from insects and fish to small mammals, such as rabbits and mice.

Due to their ecological role as a predator, minks are susceptible to bioaccumulation of harsh chemicals and toxic metals. Some toxins that are of particular concern for mink health are mercury and insecticides, which are common pollutants in our waterways.

Minks prefer wetlands including coastal marshes or swamps. Wetlands continue to disappear in North Carolina due to development and urbanization, which has contributed to the decline of mink populations in recent years. It is essential to protect wetland habitats and reduce the toxins that enter waterways by keeping garbage and chemicals off the landscape to support minks and other wildlife.

Minks aren’t picky when it comes to choosing a den and will move between dens frequently unless they have a litter of kits. They nest in old burrows made by other animals, in dense vegetation, or in cavities of roots or trees. Minks typically reach sexual maturity and have their first litter around one year of age.  Breeding season for minks is January through February and females bear  litters of 4 or 5 kits after 5-9 weeks of gestation.

Due to minks’ wide range of food options, along with their adaptability to a variety of den habitats, mink populations are not declining rapidly.  Wetland habitat loss is the most threatening challenge to their survival.  In order to protect and support minks, we must protect wetland habitats from degradation by preventing runoff of pollutants and over-development.