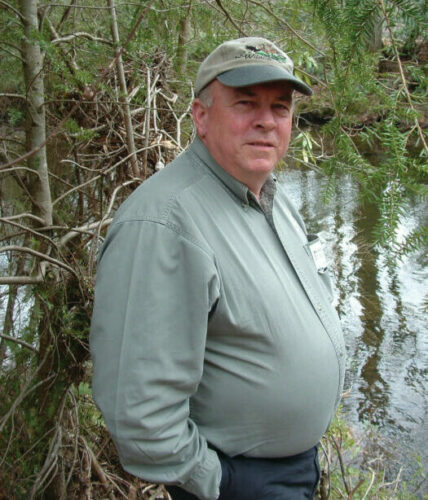 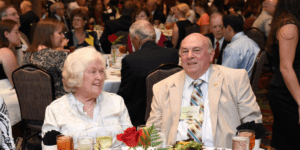 Hannah and Dick Hamilton at the 54th Annual Governor’s Conservation Achievement Awards banquet, where he was named 2018 Conservationist of the Year.

Dick Hamilton was a lifelong wildlife and conservation giant who significantly impacted North Carolina’s landscape for over five decades. His recent passing from illness is devastating news to all of us who knew him, learned from him and loved him.

North Carolina Wildlife Federation was fortunate to have a decade of Dick’s expertise, knowledge, wit, humor and leadership after he retired from the NC Wildlife Resources Commission. I offer that the founders of NCWF, who formed solely to work for establishing a state wildlife agency in 1945, would have envisioned the perfect ideal representative for such an agency to be in the mold of Dick.

A legendary and consummate champion for wildlife and those who enjoy it, Dick was a rare man  — a walking encyclopedia coupled with humble pragmatism. He knew what it was like to fight for public resources. He knew how vital public access is to our future. He knew that the wise, science-based management of our public trust lands and waters is the foundation of our heritage of wildlife appreciation.

For more than 40 years, Dick was at the cutting edge of the public trust doctrine. He was a biologist and chief of wildlife before becoming the executive director of the NC Wildlife Resources Commission. Over the last few years, he was one of this state’s most influential advocates for sporting and outdoor heritage issues.

But just as importantly, I think Dick Hamilton was the moral compass for North Carolina wildlife conservation. He witnessed first-hand just about every success and failure over the last 40 years and continued to roll his sleeves up every day for wildlife.

We offer heartfelt gratitude for every North Carolinian who ever has, or ever will, raise a rifle or a fly rod or a pair of binoculars, and give thanks for Dick Hamilton, a legacy unparalleled.