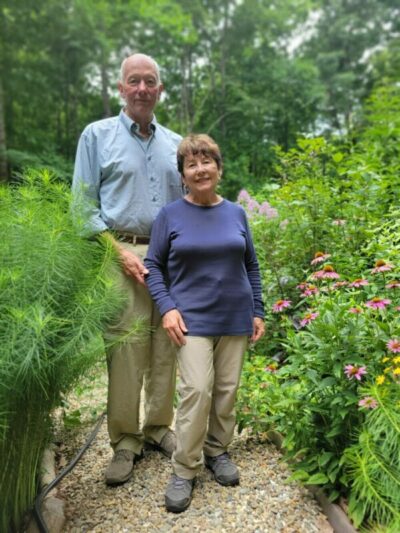 When Fireflies Were Everywhere

“I remember when fireflies were everywhere growing up,” said Pat Holder. “I took a mason jar to watch them up close and then let them go.”

Pat’s connection with wildlife and the outdoors was just a part of growing up on a tobacco farm in what was then a rural part of North Carolina, but not so anymore. Millbrook, between Raleigh and Wake Forest, is much different today. Connecting with nature wasn’t a thing you did on the weekends; rather, it was part of your livelihood. Pat’s family hunted and grew their own food, but Pat was drawn to reading and loved school.

“When I didn’t have chores, I would sneak away to read,” Pat said. “I read all the time and enjoyed it.”

She grew up poor but never knew there was a lack of anything because there was love, kindness and community. She had great teachers, gardened, and had contact with the outside. “It was part of what life was for me,” Pat said. They also shared what they had. “My grandmother would tell me to pick some green beans and take them down to the older neighbor.”

Sharing and giving back is a value Pat holds dear and practices to this day. “That is just what you do. You help your neighbor, whatever the circumstances might be,” Pat says. Helping your neighbor includes pollinators and other wildlife “neighbors” that visit her yard.

What ignited this drive to do more for wildlife? Having completed several satisfying careers that kept Pat at a distance from nature, she often read about the monarch butterfly’s plight and decided to help.

Pat and her husband, Gene, dedicated their property as habitat for wildlife by keeping the trees, leaving the leaves and habitually nursing a lush and ever-growing pollinator garden. Milkweed, scarlet bee balm, black-eyed Susan, phlox, and many other native pollinator plants in the Holders’ garden feed red-banded hairstreaks, notched flower long-horned beetles, syrphid flies, monarch butterflies, and other pollinators, including fireflies.

If Pat won the lottery, she would plant more native plants for the butterflies, bees, beetles and fireflies. You don’t have to look far to wonder why. Habitat is being eaten up by development because of North Carolina’s fast-growing population. But just as people need places to eat, live, and raise a family, so do pollinators. In fact, they are essential to our survival. You can thank a pollinator for one of every three bites of food you eat. Without pollinators, humans and all of earth’s terrestrial ecosystems would not survive.

Growing pollinator habitat in the hopes that one day, there will be fireflies in the numbers she remembers as a little girl so that her grandson can also enjoy the wonder of and connection to nature is a dream Pat has not given up on. This is also why Pat and Gene are NCWF Charlie Shaw Society members. By donating an annual gift of $1,000 or more, you can join Pat, Gene, and other members of the Shaw Society.

Contact NCWF VP of Philanthropy Kate Greiner at [email protected] to learn about opportunities to invest in wildlife, habitat and connecting people to nature.

Charles Raymond Shaw was born on July 15, 1932. He was raised at Overhills, the Harnett County estate of the Rockefeller family, where he developed an early and abiding love for wildlife and the environment. Charlie helped found the Wake County Wildlife Club in 1964 and remained a charter member. He served as the club’s president in 1968. He was elected president of NCWF in 1973 and assumed the post of executive vice president later that same year. In 1981, he became the southeastern Regional Executive of the National Wildlife Federation. He was inducted into the North Carolina Conservation Hall of Fame in 1988.

The Charlie Shaw Society continues his legacy in raising funds for what Charlie always believed in: the conservation of our unique natural resources. Society members are our most dedicated supporters – generous members who have committed to the work and programs of NCWF through an annual contributing gift of $1,000 or more. Some NCWF Shaw donors prefer to give by stock, donor advised fund or IRA. Gifts can also be made in one lump sum or any smaller contributions within a calendar year and can be directed to any NCWF program that is of interest to you.

A Journey of Stewardship: Message from CEO Tim Gestwicki