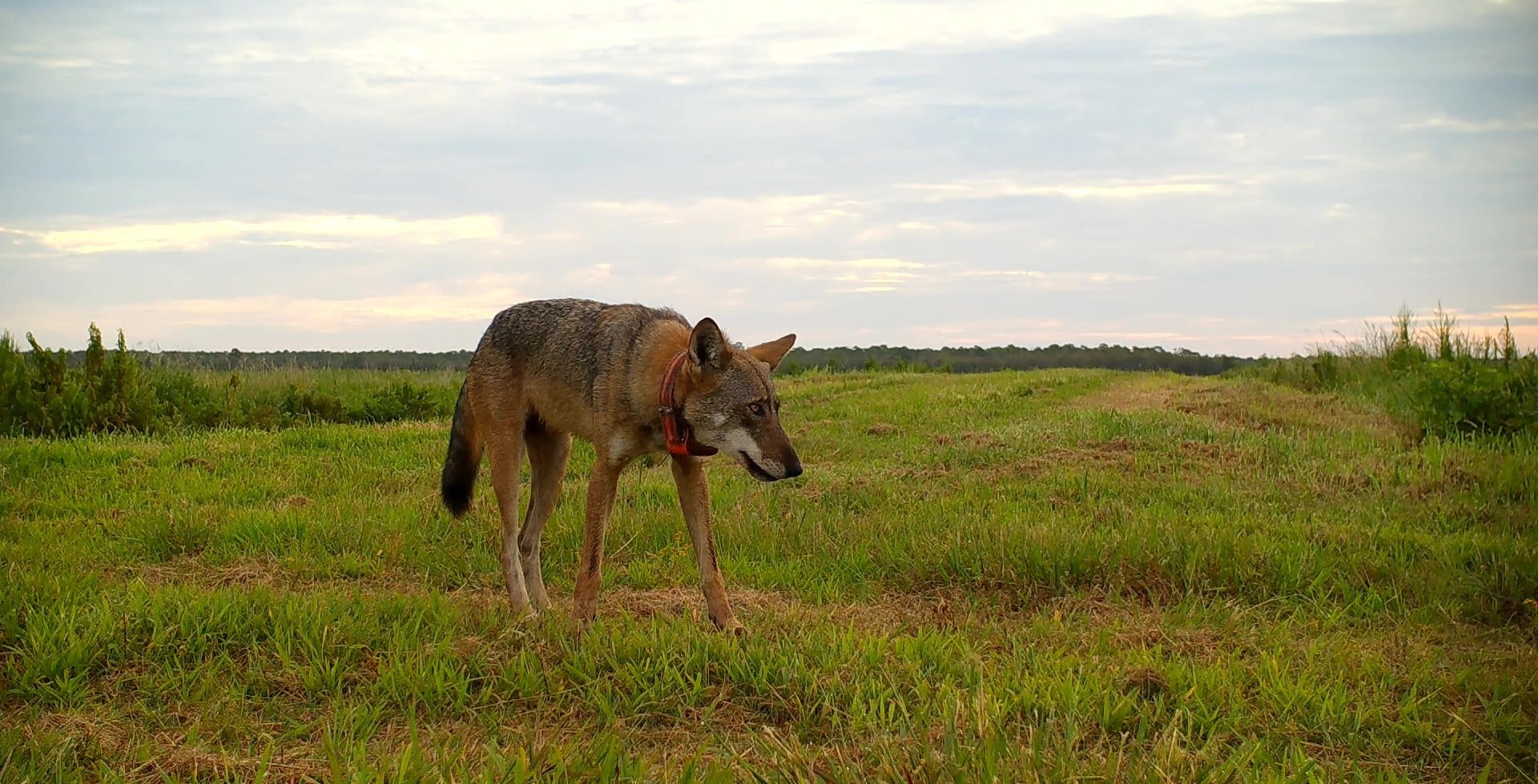 Efforts to recover the endangered red wolf in North Carolina reveal the enormity of planning that goes into managing such a species in the wild. The execution of these plans requires extraordinary time, effort, passion, and dedication of biologists, geneticists, wildlife population modelers, disease specialists, and many others. It takes an army of scientists, technicians, and partnerships to recover a species, and at the ground level—in the woods—the techniques used by trained field biologists are invaluable to saving the species.

Red wolves are federally listed as endangered under the Endangered Species Act of 1973 and managed by the U.S. Fish and Wildlife Service (USFWS). While this level of protection affords red wolves special considerations, it also makes the work of biologists critically important because species recovery depends on the genetic diversity of a limited number of red wolves and the effectiveness of the methods used to increase population numbers. Literally, every red wolf counts. Red wolf recovery utilizes management techniques such as captive breeding, island propagation, red wolf release, coyote sterilization, and pup-fostering.

First, let’s explore what it means to have a litter of pups born in the wild and how pup “fostering” contributes to population numbers. A wild litter consists of pups born to parents that move freely across the landscape, and this can take place through propagation in an island setting or when young red wolves are born to red wolves occurring within eastern North Carolina’s wild population.

The Eastern North Carolina Red Wolf Population (ENC RWP), which is currently the only known population of wild red wolves in the world, consists of Beaufort, Dare, Hyde, Tyrrell and Washington Counties, although, like other wildlife red wolves do not identify county boundaries.

Currently, there are an estimated 19 to 21 wild red wolves in eastern North Carolina. 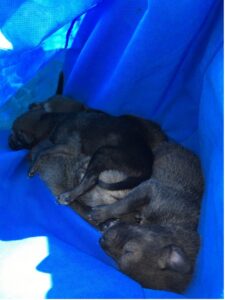 Red wolf pups were fostered in a den in the wild in 2021. Photo credit: USFWS

To initiate the fostering process, biologists use radio telemetry to monitor wild female red wolves starting in early to mid-April to document when and where the females begin to utilize a single location for an extended period. This usually indicates they have denned and likely given birth. Once the den and existence of a wild litter of pups is verified by the biologists, captive-born pups of similar age can be inserted into the wild den.

Experienced red wolf parents are preferred for the pup fostering process, although it can be completed by younger, more inexperienced red wolves, as well. Also, the preference is to maintain a litter size that does not put stress for extra resources on the parents to ensure that all pups can be properly cared for by the adults. To further ensure acceptance of the pups by the adult female wolf, the fostered pups are nestled together with the wild pups to transfer the scent (including urine) of the wild pups to the fostered individuals.

While in the den, biologists insert a Passive Integrated Transponder (PIT) tag under the skin of each pup so the red wolves can be identified and located in the future, and cheek swabs are collected from the wild pups to obtain their genetic profiles. Once the transition of pups is complete, the biologists leave the den and await the return of the adult female red wolf. The fostering process is deemed successful if the adult female red wolf stays in the current den and continues to raise the captive-born pups with their wild counterparts or if the female moves to a new den and takes all the pups with her. 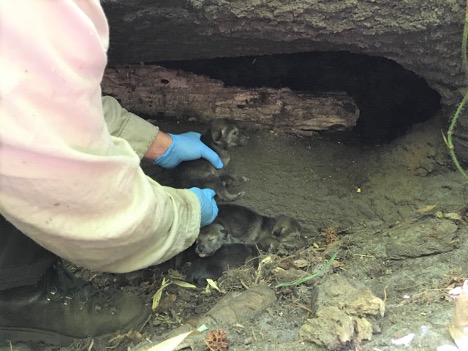 Red wolf pups are placed in a den in the wild as part of the fostering process. Photo credit: USFWS

More than 240 red wolves are held in captivity at 50 facilities across the country, either for future breeding purposes or to eventually release into the wild through the Saving Animals from Extinction (SAFE) Program. If the timing of the birth of a wild litter coincides closely enough with that of a captive litter, ideally while the pups are under two weeks of age, the pups may be deemed a good fit for fostering and the individuals are transported to North Carolina. The fostering process requires the timing of birth of the captive and wild litters to closely align and the insertion or switch to occur at a young age to provide the best chance for acceptance of the pups by the adult female red wolf. As the pups grow, they become more mobile and may potentially venture off before the female returns to the den.

In 2021, captive-born pups that were fostered were flown to North Carolina due to the distance and time constraints of the fostering process. When the red wolf pups are large enough to physically support a Very High Frequency (VHF) transmitter or Global Positioning System (GPS), they are trapped in the wild and fitted with an orange collar with reflective orange material so biologists can track the red wolves’ future movements and interactions with other red wolves. The orange collars with reflective material help identify these canids as red wolves to decrease accidental gunshot mortality from mistaken identity while making the red wolves more visible to drivers on local roads.

For the release of adult red wolves, biologists must ensure that captive-born red wolves have minimal to no human interaction or conditioning. Once red wolves grow to adulthood in captivity, it can be increasingly difficult for the red wolves to adapt to life in the wild and survive, further limiting the ability to increase red wolf numbers and the genetic diversity of the wild population.

If red wolves are comfortable with or used to human interaction, they may not be as wary of people once released in the wild and may attempt to locate food or utilize roads to obtain resources from humans. This can have negative consequences such as human-wildlife interactions, unintended predation of livestock, or wolf-vehicle mortalities, all impacting the long-term survivability of the species. Several methods are used to reduce human interaction with red wolves within the captive population and red wolves chosen for release are evaluated using several criteria to increase their likelihood of success in the wild. 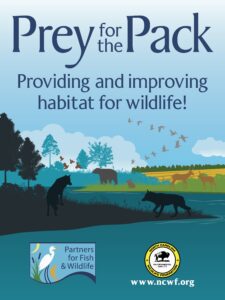 Prey for the Pack, Firebreak Project

NCWF and the USFWS Partners for Fish and Wildlife Program continue to work to voluntarily enroll private landowners in the Prey for the Pack habitat improvement cost-share program. NCWF recently received additional funding to support program efforts allowing for an increase in the amount of enrolled acreage.

Also, NCWF is a partner in the Firebreak Project, a joint effort between Pocosin Lakes National Wildlife Refuge (PLNWR), the Coastal Wildlife Refuge Association, and NCWF. The project manages and maintains firebreaks on PLNWR to decrease the intensity of wildfires, with the added benefit of habitat improvement to numerous wildlife species.

While fire is an important part of natural landscapes, sometimes habitat management is needed to reduce the intensity and ability of fire to spread. Hundreds of acres of early successional habitat, used as firebreaks on PLNWR, have been implemented and the work has employed local N.C. Forest Service staff.

Prior to mechanical treatment, the firebreaks were full of dense woody vegetation with little open space. However, after the dense vegetation was removed, a greater amount of early successional habitat, including ferns and smaller shrubs, was available for small mammals or other wildlife. The treatment of these areas also created edge habitat, which is excellent for the movement of red wolves and hunting of prey species. By increasing prey for red wolves and opening travel corridors, the red wolves are more inclined to utilize and thrive in the habitat.