The Birds are Back in Town! Watch Live Osprey Cam on Lake Norman 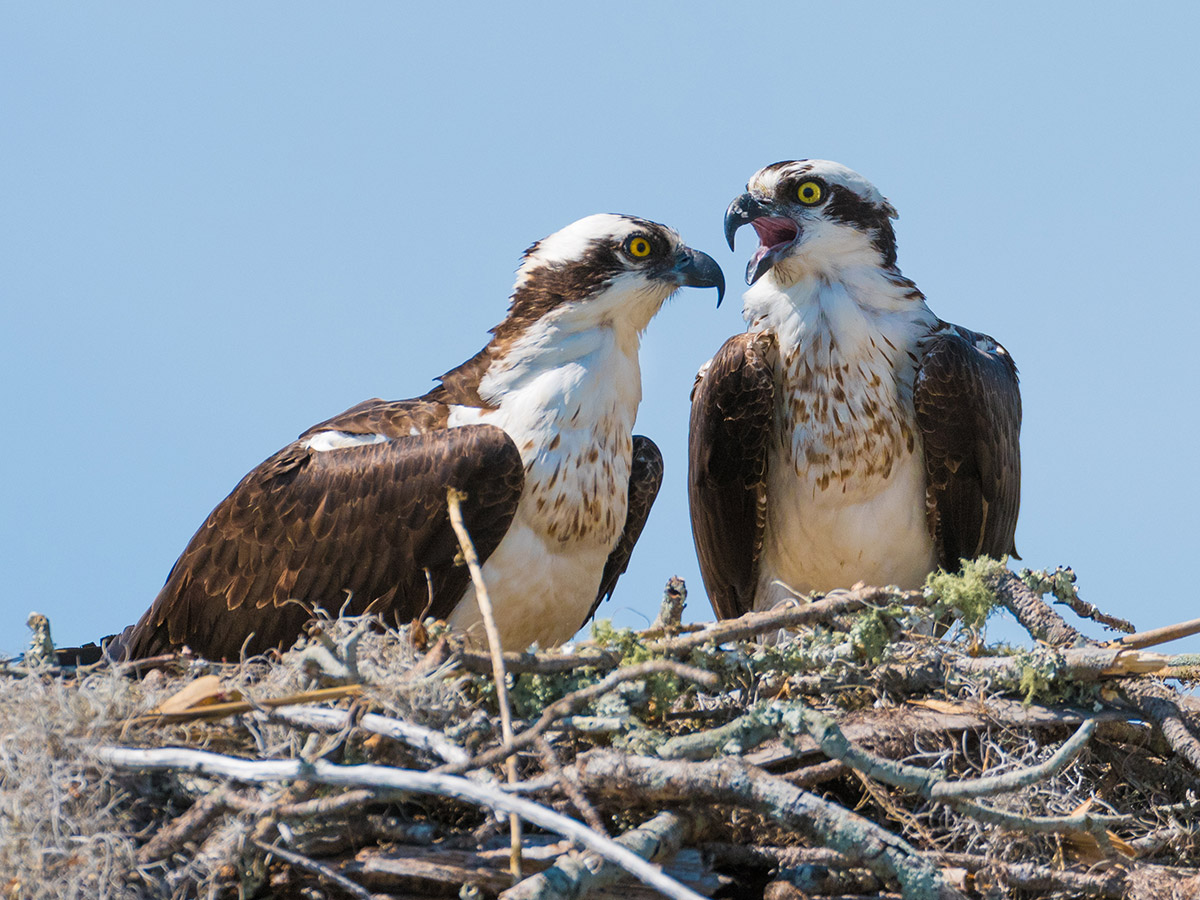 Our beloved and world-famous ospreys, Reuben and Cherise, have flown the coop from their wintering grounds and made their way back to their nesting platform on Lake Norman. And by the looks of it, they’ll be quite busy as they rebuild their nest in preparation for mating and egg-laying this spring. We should see anywhere from one to four eggs in April or May, with young osprey hatching in June or July. Keep checking back to watch the entire breeding and nesting process for these amazing birds – a unique opportunity to view wildlife in their natural habitat!

Osprey (Pandion haliaetus) are prevalent along the 225-mile long Catawba River running from western NC down into South Carolina, but this wasn’t always the case. As late as the early 1980s, osprey populations on the Catawba River, like in many places, were non-existent or minimal at best. This was due to environmental factors, most notably widespread usage of the pesticide DDT, which weakens eggshells. Their numbers have significantly increased through a concerted effort to re-introduce osprey populations.

Previously, osprey built nests in Lake Norman atop old navigational markers that were precarious and unsafe for eggs and chicks during heavy summer storms. Volunteers from NCWF, Lake Norman Wildlife Conservationists and Piedmont Area Wildlife Stewards replaced the markers with 30-foot poles with metal platforms attached and deployed by barge.

The unencumbered height of the platforms is attractive to the birds while also protecting them against predators like black snakes and raccoons. Additional platforms are installed in Lake James, Mountain Island Lake, Lake Wylie and Lake Norman–all reservoirs of the Catawba River.

They provide nesting sites on large open bodies of water and healthy prey options, primarily live fish. Osprey will catch fish from the water using their long, hooked talons. An osprey can plunge so forcefully into the water that it will completely submerge. When carrying their prey back to the nest, osprey will arrange the fish so it’s facing upright head forward. Occasionally, they’ll catch and eat a snake, eel or even a frog.

The thriving osprey population on Lake Norman is a testament to the effectiveness of our mission to protect, conserve and restore the wildlife and habitats of North Carolina. Nearly all the platforms support nesting ospreys year after year. The young birds fledge in the summer and often migrate to Central and South America in the fall (the females usually leave about a month before the males), and they return to their nesting sites every March.

A grant from the Catawba-Wateree Habitat Enhancement Program and support from NCWF members and individual donors funded the installation of a solar-powered video camera for Reuben and Charise’s nesting platform.

And we’ve expanded our program with a camera for great blue heron, the largest heron found in North Carolina, standing three feet tall. They are colonial nesters in the Piedmont where multiple nests are found, usually over water, where they perch in tall trees away from predators such as raccoons and black snakes. The great blue heron rookery is protected as a Colonial Waterbird Nesting Area.

Make an investment to protect and conserve migratory birds and other wildlife and watch our educational webinar below on osprey and others on great blue herons and exploration of colonial nesting birds.

Posted in News & Press Releases, Habitat, Our Work, Wildlife
Back to News / Blog