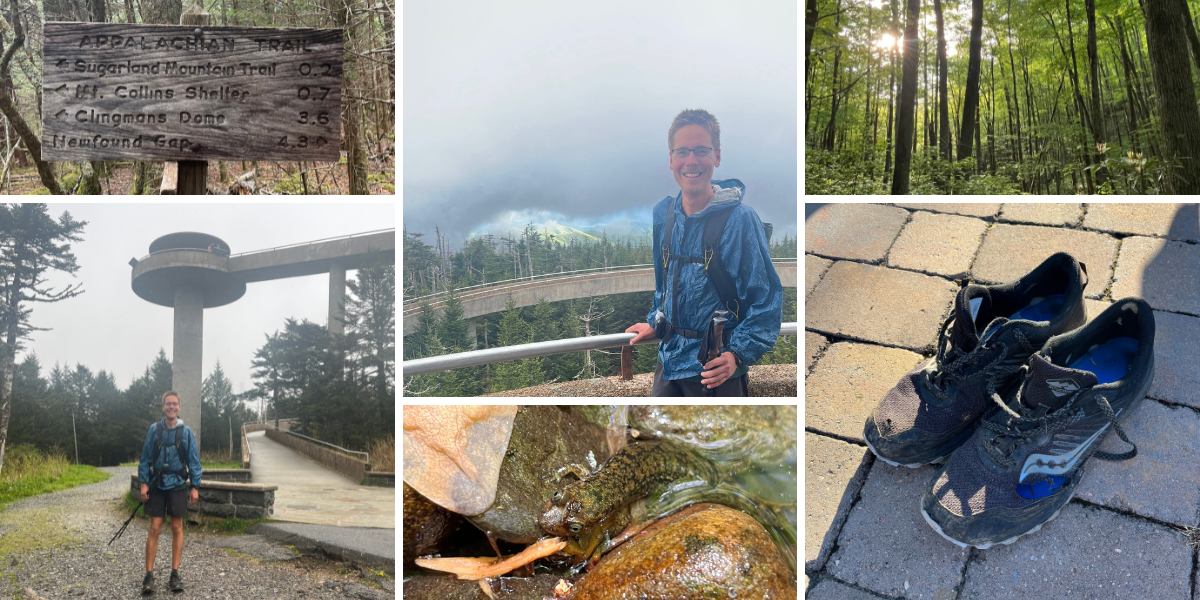 "I will never forget the 52 days I spent walking across the state of North Carolina," said Luke Bennett after completing the Mountains-to-Sea Trail. "The connection I have to my home is undoubtedly stronger; the love I have for our state's wildlife will never fade.”
May 31, 2022

The poet Emerson said when we’ve worn out our shoes, the strength of the journey has passed into our body – a sentiment that certainly applies to Luke Bennett.

The 23-year-old hiked 1,175 miles from the Outer Banks to the Great Smoky Mountains to immerse himself fully in North Carolina’s abundant natural resources. His 52-day trek ended with a well-worn pair of Saucony running shoes, renewed love and appreciation for our state’s diverse wildlife and habitat, and $8,315 raised toward their protection, conservation and restoration.

Luke’s journey started getting its legs last October when he emailed North Carolina Wildlife Federation after discovering our website while searching online. At the time, he wanted to use his goal of breaking the Mountains-to-Sea trail record as a fundraising opportunity for a nonprofit working to preserve North Carolina’s natural beauty.

“My name is Luke Bennett. I’m going to attempt the Mountains-to-Sea Trail’s fastest known time in April. The trail is 1,175 miles and stretches from the Great Smoky Mountains to the Outer Banks. I’ve lived in every region of North Carolina and have fallen in love with the wildlife and the land I’m lucky to call home. In an effort to give back, I’d like to use this hike as a way to raise money for the NCWF. What would be the most effective strategy moving forward? Thank you for protecting this beautiful state.”

Over the next couple of months, Luke weighed the logistical challenges of breaking a record against his desire to fully experience the sense of wonder and appreciation for the outdoors he’s had since he was a child growing up in Durham.

In the end, North Carolina’s beauty and natural landscapes won, and Luke decided he’d instead go at his pace rather than try and break a record. “It’d be a shame if I blazed through the MST without enjoying all the beauty and people along the way,” he said. “Not to mention it would be incredibly difficult to shed light on issues threatening wildlife and habitat if I’m always in a hurry or too exhausted to care.”

Hiking for habitat on behalf of N.C.’s wild lives and places 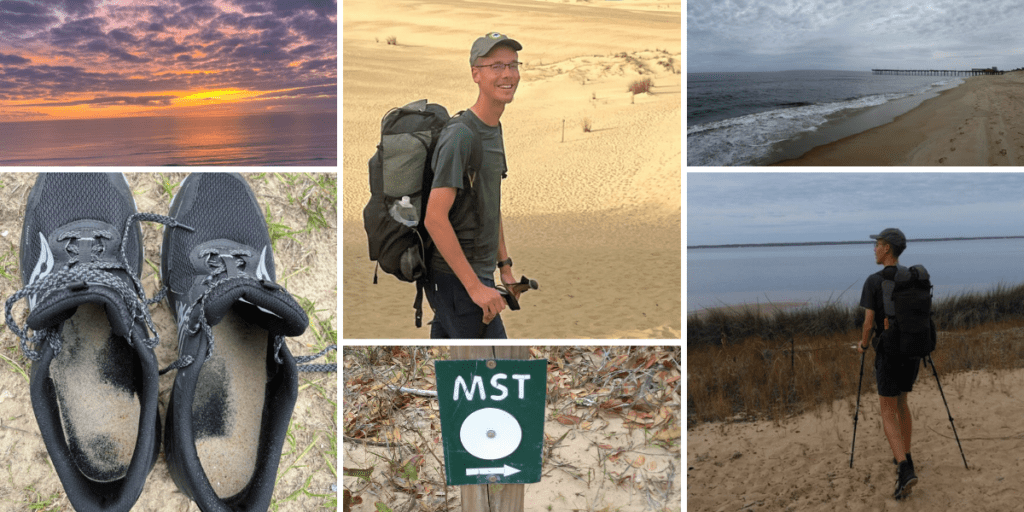 With hiking poles in hand, a backpack of provisions and sporting his new NCWF hat, Luke hit the Mountains-to-Sea Trail on March 23 on the Outer Banks. His first day – “a humble start” – began atop Jockey’s Ridge, the Atlantic Coast’s tallest sand dune.

“I felt like I had been transported to the Sahara Desert or into the setting of Mad Max Fury Road. Sand is already working its way into everything. The sand along the Outer Banks is loose. My heel sinks in with every step and sand slowly fills my shoes.”

On May 13, he reached  Clingman’s Dome – the highest point in Tennessee and the Great Smoky Mountains National Park – where his Dad was waiting to welcome him. Luke said he didn’t have any sort of “great epiphany” when he completed the trail because it wasn’t about the destination; it was about the experience. While the MST is still in its infancy, he believes it could become one of the premier hiking trails in North America with enough resources.

“The lessons and realizations are within the life of the journey itself, not in its ending. I will never forget the 52 days I spent walking across the state of North Carolina,” he said. “Of course, there were challenges, but I never felt alone. Thank you to all the kind strangers who became friends and to all my friends and family who were with me every step of the way.”

Although he’s crossed the finish line on Hiking for Habitat, Luke’s partnership with N.C. Wildlife Federation and love for North Carolina continues to gain speed. Throughout the journey, Luke offered daily observations and photos of the wildlife and habitat he encountered along the way. Once Luke made it back home to Oak Island and had a chance to catch up on sleep and showers, he reflected and shared more about his Hiking for Habitat experience.

“Thanks to North Carolina Wildlife Federation for their efforts in protecting, conserving and restoring our state’s wildlife and habitat,” he said. “I’m eager to return the favor and pay forward all the generosity I received. The connection I have to my home is undoubtedly stronger; the love I have for NC wildlife will never fade.” 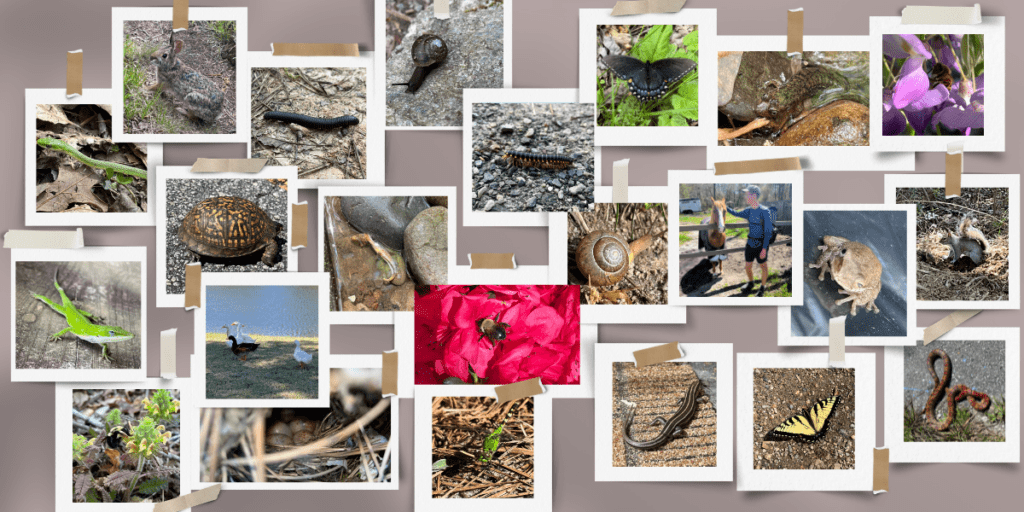 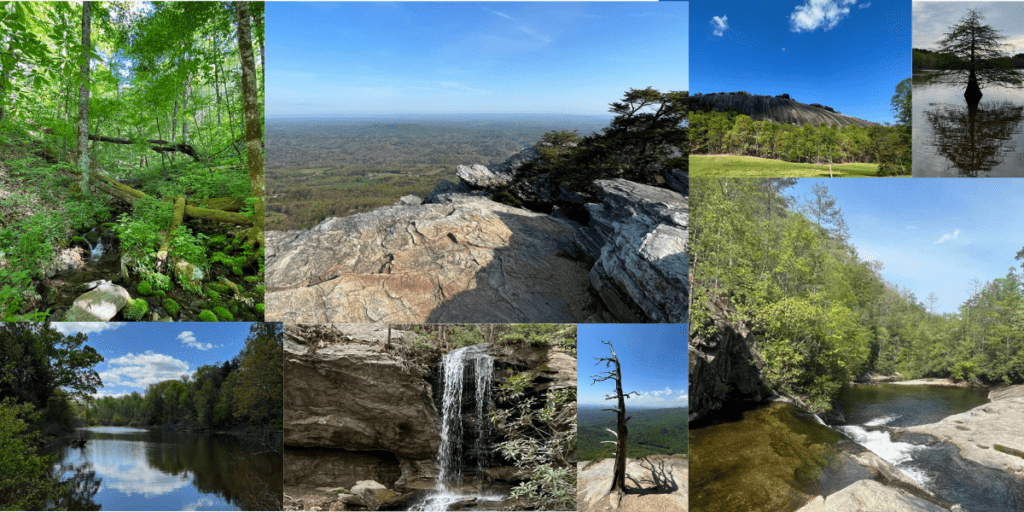 There’s no shortage of majestic views on the Mountains-to-Sea Trail. 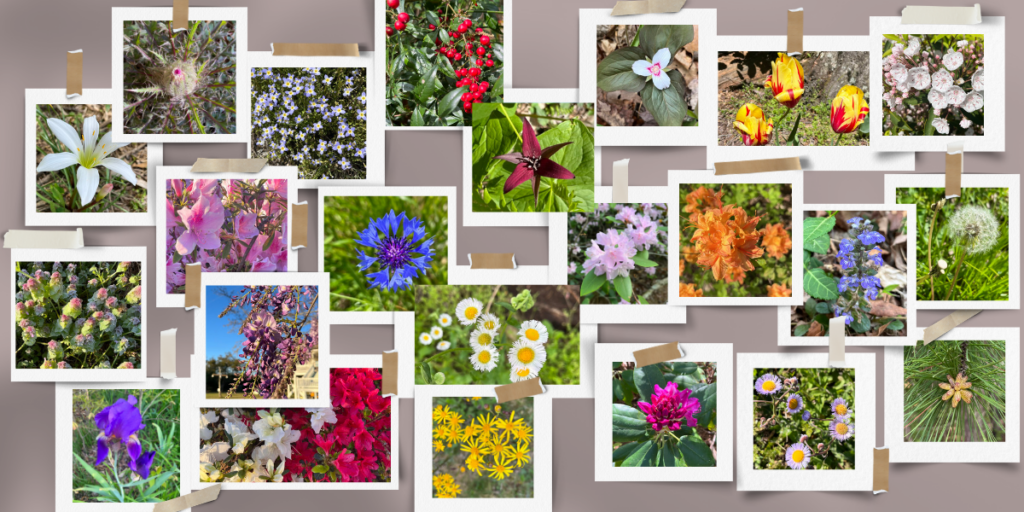 Bountiful blooms “I’m so glad I hiked in the spring and got to see many different plants in bloom. I learned a lot about trees and wildflowers.” 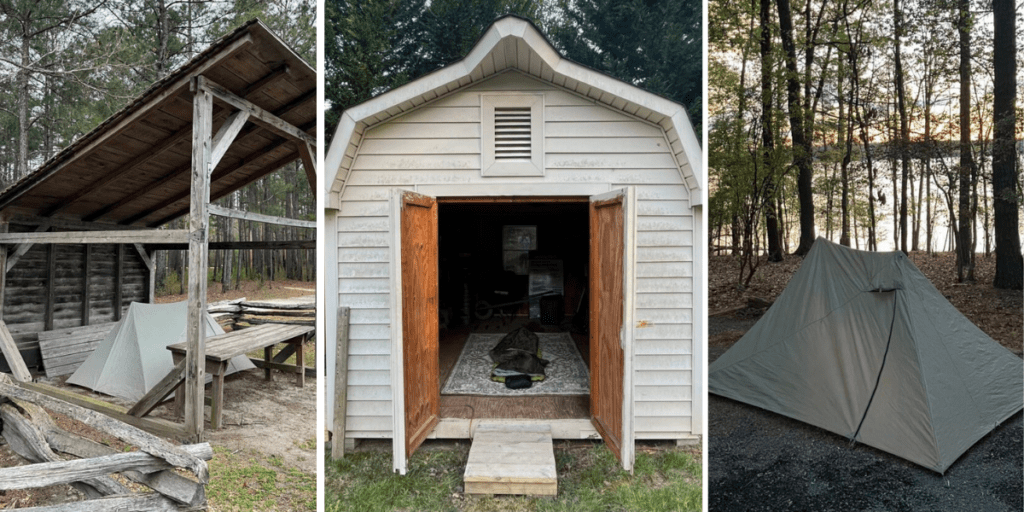 Catching zzzzzs. “For a few nights, I had to sleep in some questionable camping spots. I slept in fire departments, churches, behind general stores, campgrounds, on the beach, random spots in the woods, historic battle sites and plantations, backyards, porches, comfortable beds and sometimes a motel. Trail Angels Steve and Angie let me sleep in their backyard shed which had a heater and my own personal swimming pond just outside the shed door. There were also some great tent camping spots in the mountains. A backcountry site in Stone Mountain State Park near a stream was probably my favorite.” 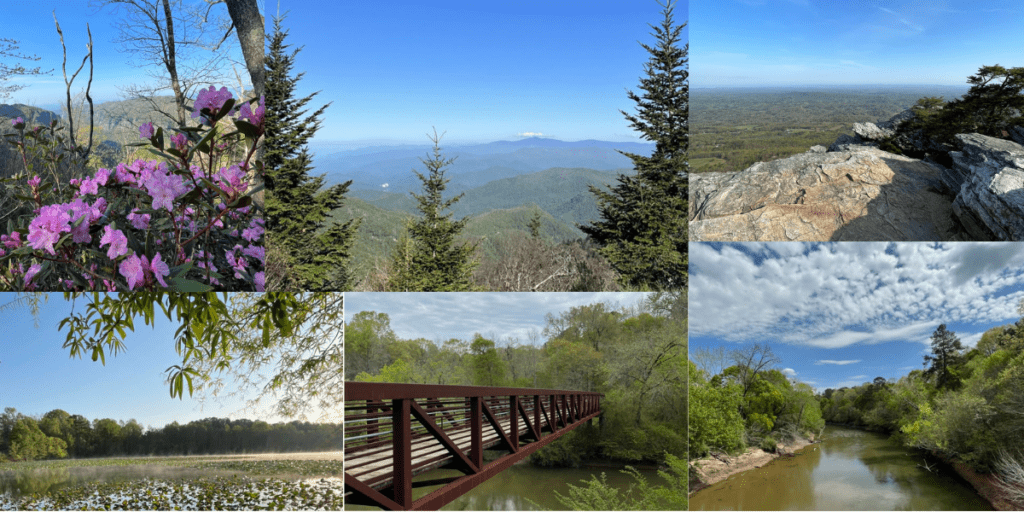 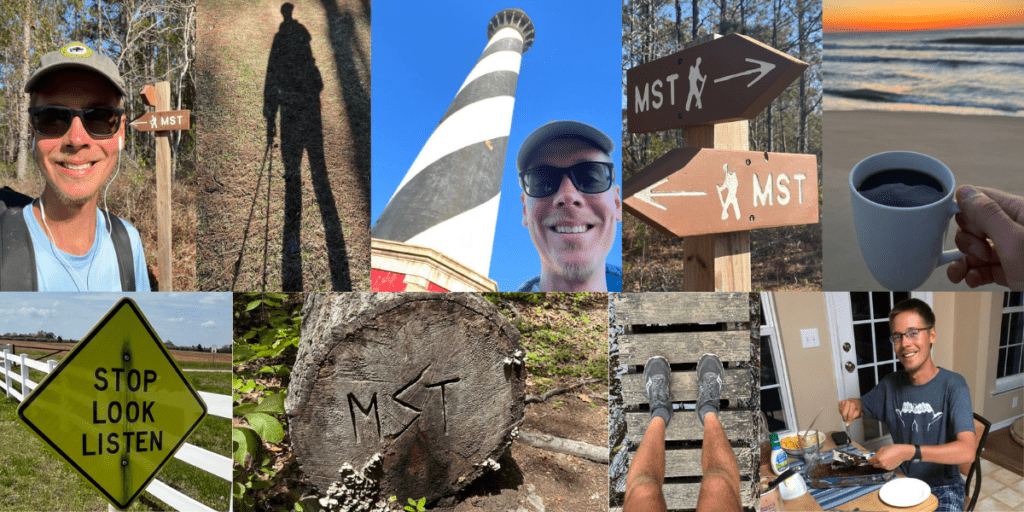 Celebrating 23 trips around the sun. “My old neighbors in Durham, Mike and Kathy Huff, fed me like royalty for two nights. Among other delicious food, they made a homemade birthday cake with icing drawings of the mountains and the ocean.” 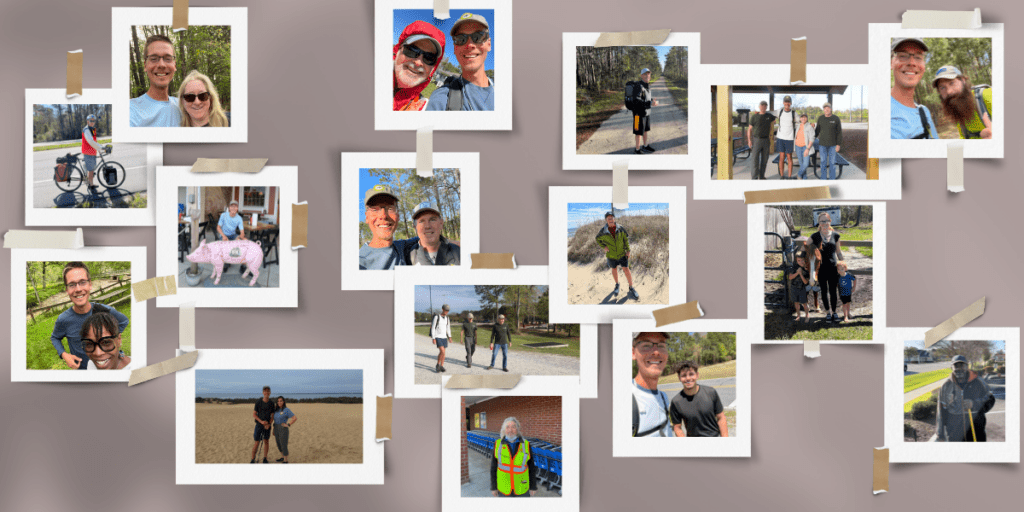 Oh, the people you’ll meet! Ma Sandy (we met during a ferry ride), Mark (biker heading from Washington DC to Key West), Andy (Food Lion worker who told me stories about his train-hopping days in England), Chief Brock (Beaver Dam Fire Department fed and housed me for a night), Chris and Devon (trail angels near Greensboro who fed and housed me for two nights), Suzanne and Bob (trail angels in Elkin who fed me at their downtown brewery), Mary (I’m so thankful I met this trail angel in Chapel Hill. We had so much fun together), Chief Williams (trail angel at Vann Crossroads Fire Department who let me sleep at the station on a cold night), Steve and Angie (trail angels near Greensboro), Jonathan (took me out for dinner and showed me around town), Lisa and Larry (trail angels in Clayton), Jane, owner of Priddy’s General Store in Danby), Paul (Rockford General Store in Dobson). Luke also met up with NCWF Board Director John Robbins, Naadii Salaam, Bull City Trailblazers, and Monty Moree and Chad Chandler, South Wake Conservationists. “Every visit with members of NCWF was unique and special in its own way. It was encouraging to have conversations with people with similar interests who didn’t think I was crazy for wanting to hike across the state. Everyone was so knowledgeable about NC wildlife and willing to share their ideas about how to keep North Carolina wild and beautiful. Each visit boosted my energy and motivation to stay connected with the NC.” 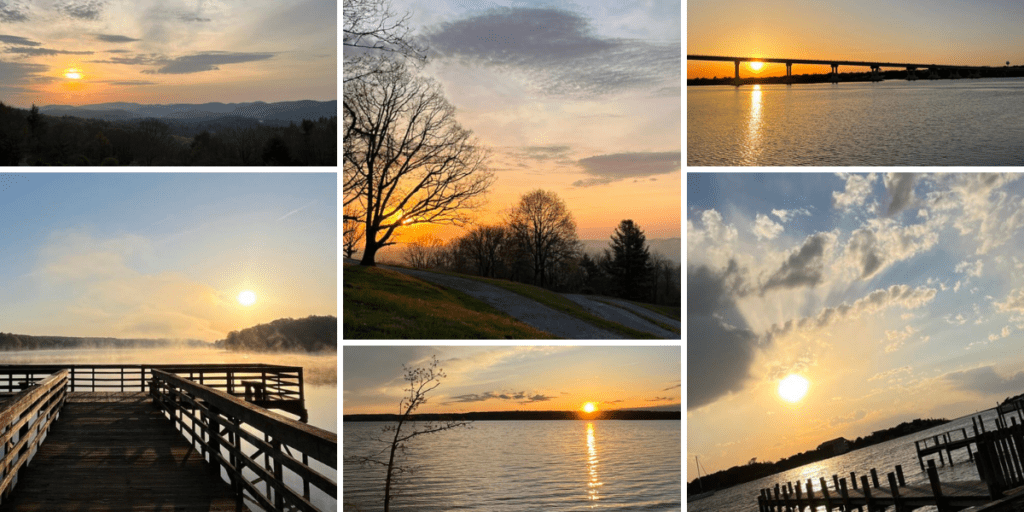 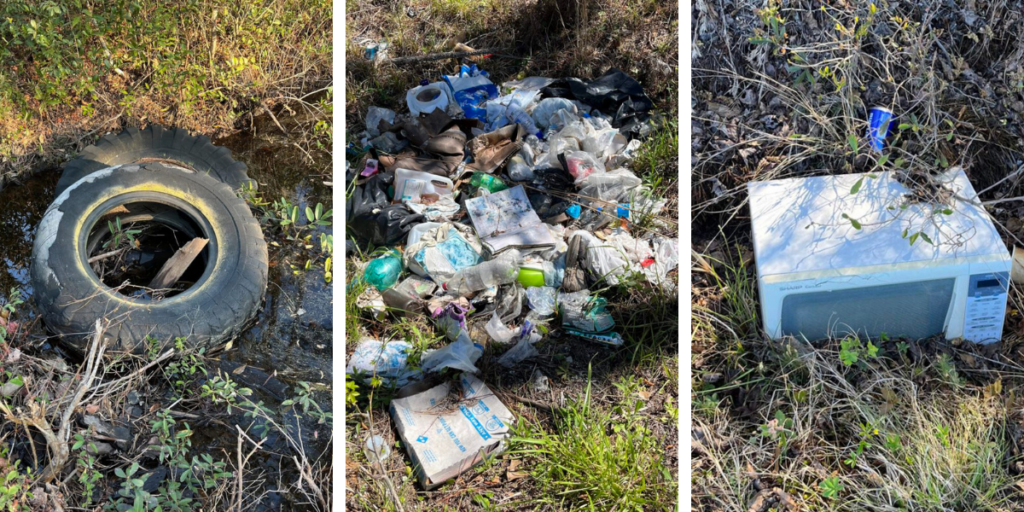 The (not so) good, bad and ugly. Trash and litter. Heat exhaustion in the Linville Gorge Wilderness. The smell of roadkill. Sunburns and chafing. Road walking. “There also were tons of off-leash dogs that weren’t happy with me walking near their yard. This was a constant fear during the road walking sections. I also had to avoid cars, especially while going over bridges when the road shoulder was no more than a foot wide.” 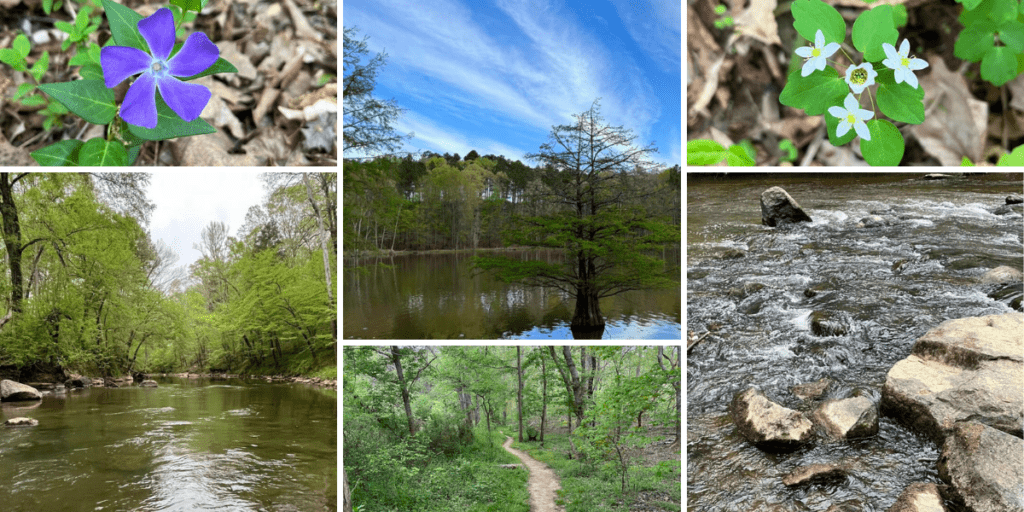 Revisiting childhood memories along the MST. Luke grew up in Durham and spent his childhood exploring the Eno River with friends. “We climbed trees, rode bikes, fished at the Eno, played capture the flag, jumped into leaves, built elaborate forts, mapped out the woods, shuffled across icy ponds, pulled off ticks, chased after snakes, caught crawfish, rolled down grassy hills, and dared each other to eat dirt and bugs.” Luke loved spending time again in the place where developed a sense of wonder and appreciation for the outdoors. “I forgot just how special Eno River State Park is to me. I will definitely revisit.” 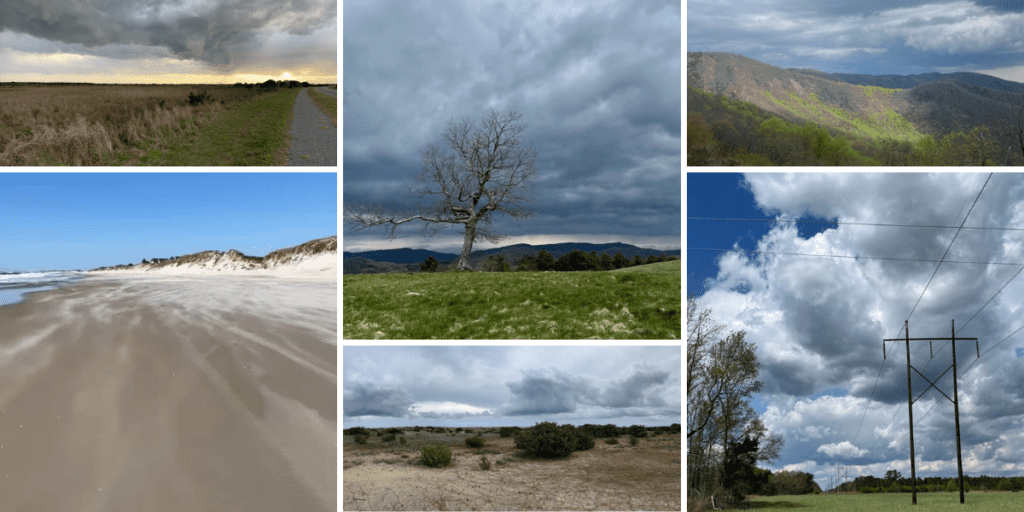 Widespread weather patterns. Headwinds on the beach during high tide, especially on Ocracoke Island. Heavy rain, especially along the coast. A few nights of close-to-freezing temperatures. Mist and fog in the mountains. A lightning storm in the Linville Gorge Wilderness. “I still think I was fortunate with the weather. Most days were dry and warm but not sweltering and most nights were cool but not freezing. I was a little worried about the weather in the mountains, but it was never bad enough to the point where I needed to find shelter.” 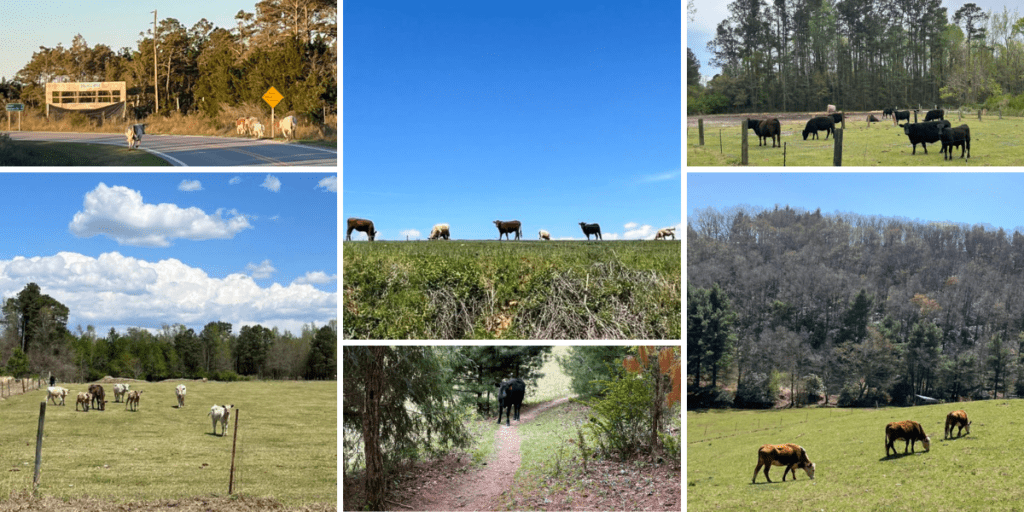 Things I didn’t realize pre-MST.  Cows (along with churches and Dollar General stores) are everywhere in NC. Strangers are typically friendly and eager to help. “At first, I wanted to do as much as possible on my own, but then I realized how much I was helping other people by letting them help me. I could see just how much people genuinely enjoyed hosting me.” The trail angel network is what makes the MST so special. NC terrain and landscape change quickly. Taking things slowly can be rewarding. Hiking is a great way to grow closer to family and friends.  Thoughtful and generous people offering me delicious foods and huge meals (even when I was full) is a great problem to have.

Luke’s tips for tackling the trail

Luke may have retired those well-worn running shoes, but there’s still time to support Hiking for Habitat and help him reach his $10,000 fundraising goal. Need more inspiration? Read all about Luke and see the rest of his photos in this blog.