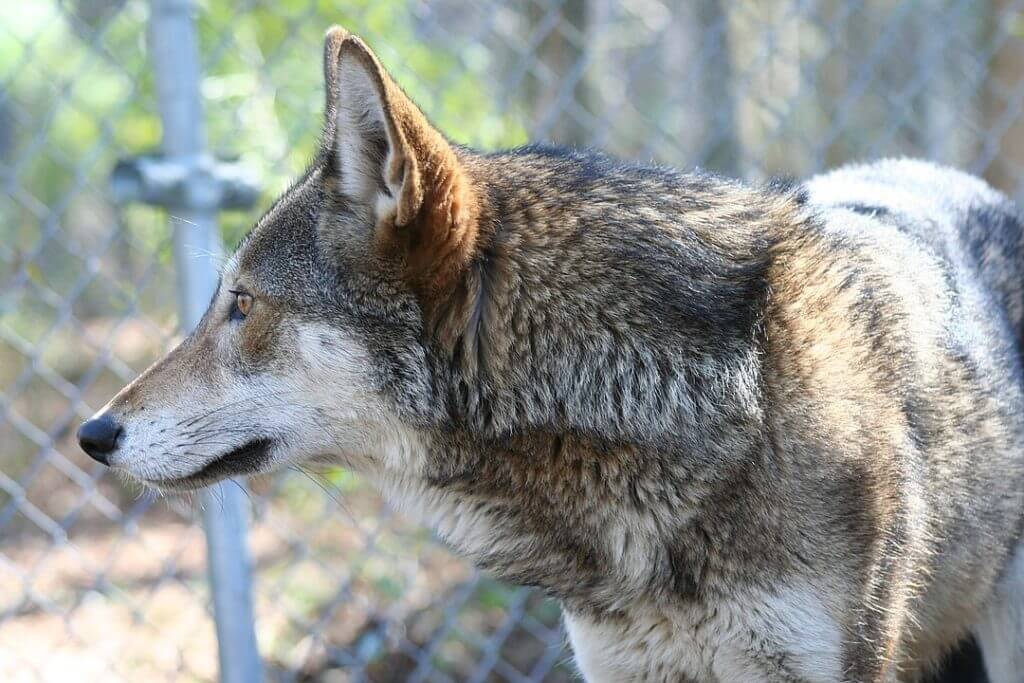 Red wolves (Canis rufus) once roamed the eastern half of the United States with a range extending from Missouri down to Texas and stretching east to the seaboard from southern New York all the way down to Florida, but populations declined to near extinction due to factors such as predator hunting and habitat changes. Today, fewer than 25 red wolves can be found in the wild, all of which reside on eastern North Carolina’s Albemarle Peninsula. The survival of these last remaining wild red wolves depends on the U.S. Fish and Wildlife Service (USFWS) Red Wolf Recovery Program and the work of program partners.

In her role as Director of Wildlife Resources for the North Carolina Wildlife Federation (NCWF), Dr. Liz Rutledge applies science-based decision making and policy to on-the-ground conservation and management programs. Sarah Loeffler has served as the NCWF Refuge Volunteer and Program Coordinator at the Red Wolf Center in Columbia, part of Pocosin Lakes National Wildlife Refuge. We chatted recently with Liz and Sarah about NCWF’s red wolf education and outreach efforts.

Sarah: North Carolina is the only place in the world where a wild population of red wolves exists and that’s something North Carolinians should be proud of and cherish. It would be a shame if we lost them forever. Red wolves serve a unique role as a top predator on the landscape and help maintain a balanced ecosystem. They’re also unique in that they live in a pack that is similar to a family unit. Their packs tend to be smaller than those of gray wolves, and usually consist of a dominant breeding pair and offspring. Once the offspring are old enough, they tend to break off, find a mate and create their own packs.

Red wolf pups can begin howling at three weeks old. Wouldn’t it be amazing to go outside and hear the howl of the red wolf again? There was a time when these awe-inspiring calls were common in our state. We can make this a reality again in the future. 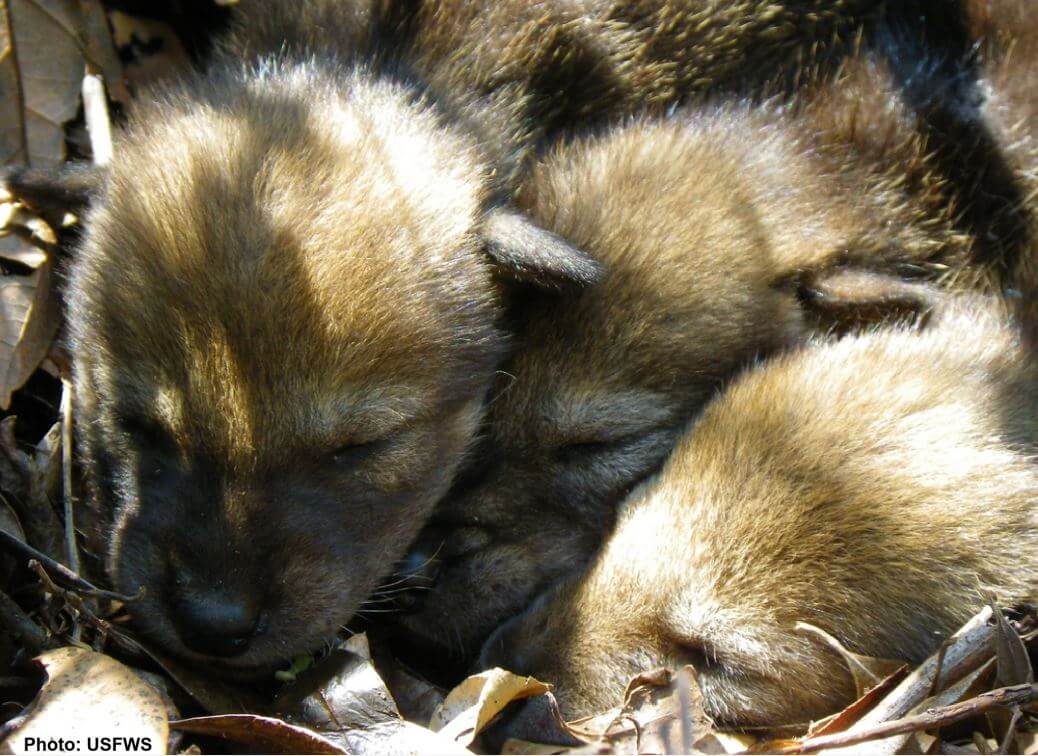 NCWF: Why are red wolf recovery efforts centered on the Albemarle Peninsula?

Sarah: Red wolves once encompassed most of the eastern half of the United States, with a range extending from Missouri down to Texas and stretching east to the seaboard from the southern tip of New York all the way down to Florida. The Albemarle Peninsula, specifically Alligator River National Wildlife Refuge, was selected in the early days of the red wolf recovery and reintroduction program for several reasons: large amounts of public land could offer the resources needed for wolf survival, the refuge is surrounded by water on three sides providing a geographic buffer, and coyotes weren’t present at the time.

Liz: Many people are unaware that wolves exist in the wild in North Carolina so creating general awareness of the species and providing historical and biological context continues to be an  important course of action. Additionally, use of road signs and other educational materials that let visitors know they’re traveling in areas wolves are known to inhabit may help reduce the risk of wolf-vehicle collisions.

NCWF is assisting the NC Wildlife Resources Commission (NCWRC) and the NC Department of Transportation with previously-constructed wildlife crossing structures at three locations on Highway 64 outside of Columbia. NCWF staff and volunteers routinely assess and report the maintenance needs of the structures and collect data to evaluate species utilization of the crossings. These results will ultimately be used to educate the public and garner support for future roadway crossing projects to reduce wildlife mortality on roads in other parts of the state.

With regard to wolf mortality resulting from gunshots, distinguishing a red wolf from a coyote can be difficult. USFWS is now using orange collars on red wolves to help hunters and landowners differentiate between the two; however, only about half of the wild red wolves on the landscape currently have orange collars. USFWS and partners hope that using the more visibly-identifiable collars will help reduce accidental wolf mortality from gunshots. It’s also important to note that gunshot mortality is not always unintentional.

Lastly, hybridization among wolves and coyotes can negatively impact recovery efforts. There is a lot of interest in the efficacy of using sterilized coyote “placeholders” to encourage coyotes to hold their territory without reproduction, and how this approach might benefit the red wolf population.

NCWF: What is NCWF doing to support a sustainable red wolf population?

Liz: NCWF has been involved in red wolf education, outreach and advocacy for quite some time. In addition to adding a staff position at the education center, we recently introduced the Prey for the Pack habitat improvement program, which is in collaboration with USFWS’ Partners for Fish and Wildlife Program. Prey for the Pack is designed to help private landowners improve habitat to support wildlife on their property, specifically endangered species such as red wolves. We’re hoping to connect with eligible participants in counties known to have red wolves, and the project and staff will provide technical support and financial cost-share to qualified landowners.

NCWF: What role do red wolves play within their ecosystem?

Sarah: In an ecosystem, everything is connected in some form or fashion, and having a top predator on the landscape such as a red wolf can help maintain balance. Wolves help manage healthy prey populations by removing sick, old or injured individuals. Healthy animals have a higher chance of escaping predation which allows them to continue to reproduce. In some cases, predation on invasive species can protect habitat and native species. In North Carolina, red wolves prey upon nutria, an invasive rodent that can damage wetland systems. Ground nesting birds may also benefit from the presence of larger apex predators like wolves, as their diet may include mesopredators like raccoons that are known to raid nests for eggs and juvenile birds.

NCWF: What are some common misconceptions about red wolves?

Liz and Sarah: Red wolves are highly misunderstood. Some individuals worry about coexisting with wolves. Many times this fear is driven by misconceptions associated with wolf behavior or concerns regarding the safety of livestock or pets. Red wolves are naturally shy, elusive and wary of people, making wolf-human interactions rare. There has never been a recorded attack on a human by a red wolf.  There are also misconceptions about the ways that a top predator, such as a red wolf, on the landscape may impact prey species and their populations. 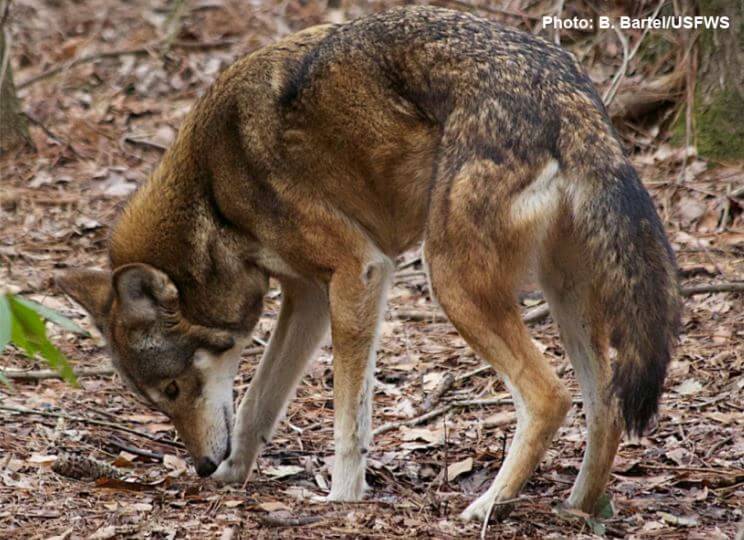 NCWF: The Red Wolf Center is currently closed because of COVID-19, but what can visitors expect to see and experience when it reopens?

Sarah: The biggest draw is the outdoor enclosure that houses a pair of red wolves visitors can see from the public viewing area. This access provides the rare opportunity to observe red wolves and their behavior in a more up-close and personal way since red wolves in the wild are naturally shy and elusive.

In our educational building, visitors can see several mounted specimens, including two coyotes, three red wolves, and a gray wolf. Viewing the mounts side-by-side gives visitors a chance to make comparisons between species and helps display what makes red wolves unique from their other canine relatives. A small theater shows a documentary on red wolves, called “Recovering a Species”, detailing the history and importance of the Red Wolf Recovery Program on the Albemarle Peninsula.

Other educational programs cover the red wolf diet and how wolves communicate with each other. The education center has a medical facility. The facility is not open to the public, but wolf biologists use the facility and enclosures to care for wild and captive red wolves.

NCWF: Tell us about the captive red wolf ambassadors at the Center.

Sarah: We currently have two wolves living at the Red Wolf Center in Columbia. One is a male wolf we affectionately call Manny. He’s 12 years old and was born in captivity. Manny came to us in September 2019 from the North Carolina Zoo in Asheboro, where he lived for several years with a female companion. Unfortunately, Manny’s long-term companion at the Center recently passed away due to her advanced age of 14. We recently welcomed a new female companion for him at the Center who we call Sage. Sage is 5 years old and also came from the North Carolina Zoo. While Manny and Sage won’t be a breeding pair, they seem to be getting along really well, and we hope they will become good friends.

NCWF: What other efforts are underway at the Center?

Sarah: We’re installing cameras in the wolf dens and hope to provide online visitors the opportunity to experience these unique animals, even if they’re unable to visit in person. Viewers will observe the wolves moving about the enclosure, interacting with one another, snoozing, sniffing out and eating the food that caretakers place around the enclosure, and maybe even hear some howling! The cameras will also help staff and caretakers observe the wolves from a distance to continue learning about their behavior and needs.

NCWF: What roles do volunteers have at the Center?

Sarah: Volunteers play a huge role. It’s only with their assistance that we can make this great resource available to the public. In 2019, volunteers donated more than 5,100 hours. They’re responsible for the majority of site maintenance, keeping the grass mowed and paths clear for visitors. They also answer visitor questions, distribute educational information and help enhance the visitor experience at the enclosure’s viewing area. Volunteers assist at local events and education tables by providing red wolf craft activities, touch-tables and other information. Additionally, we have one devoted volunteer who serves as the full-time red wolf caretaker.

NCWF: What can someone do to help red wolves if they don’t live near the Center?

Sarah: Recognizing and valuing this species is vital to its survival. There are many people who don’t even realize red wolves exist. You should take an active role in supporting the species and the recovery efforts of federal and non-governmental groups.

Liz: Educate yourself and others about red wolves and their habitat, and stay actively engaged in the current status of the population. Be willing to advocate for the species by letting your Representatives know you support red wolves in North Carolina. 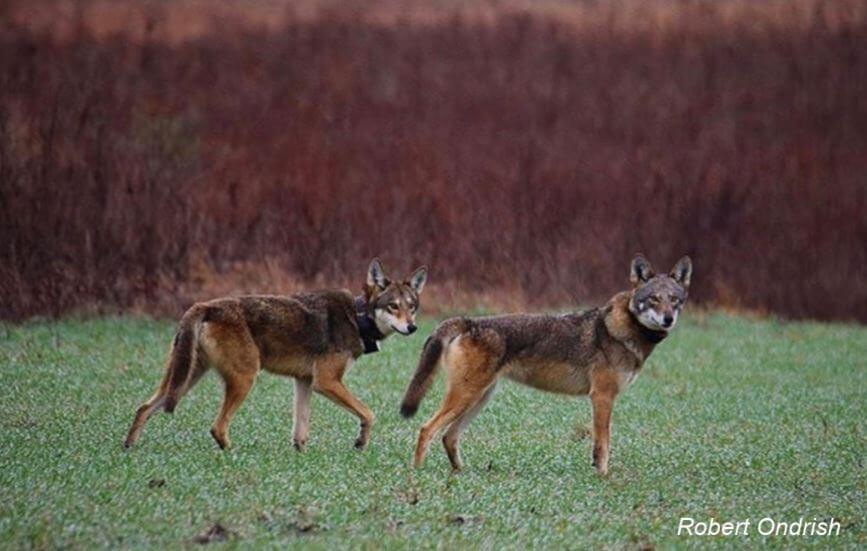 Wildlife are public trust resources so North Carolinians from the mountains to the coast should get involved. Take a trip to the Red Wolf Center or view captive breeding programs in zoo settings. And, of course, volunteer whenever possible and donate to support conservation. Species recovery requires a great deal of resources and effort, and it will take all of us to ensure that red wolves endure for generations to come.