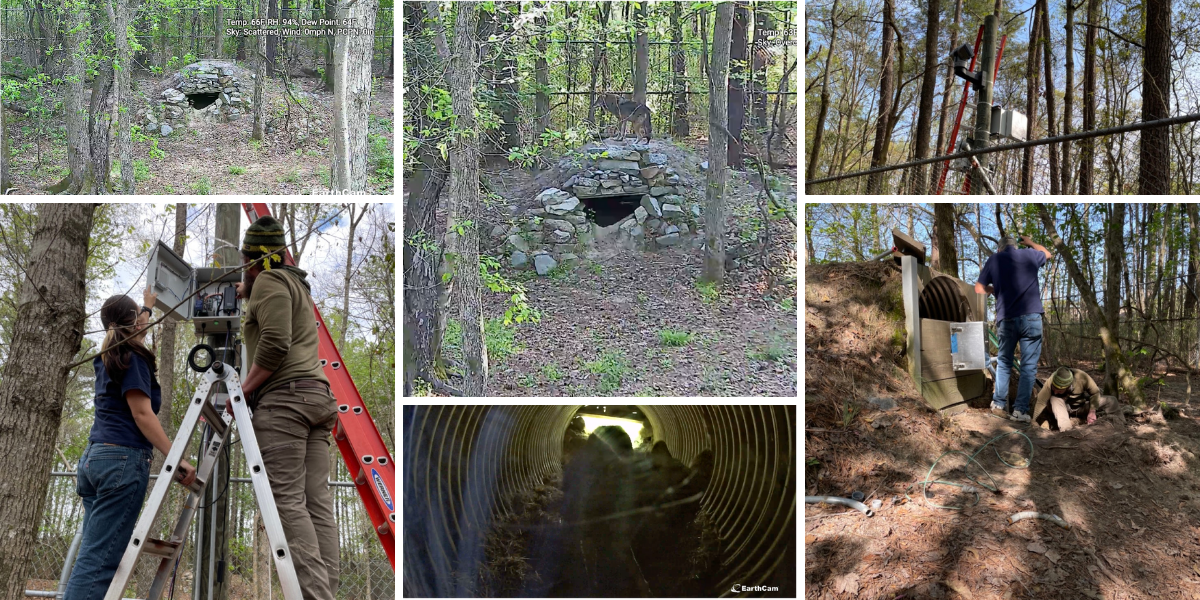 Wildlife and nature lovers from all over the world can now get a 24/7 glimpse into the life of a pair of captive red wolves, thanks to webcams installed at the Red Wolf Center in Columbia, N.C., located on Pocosin Lakes National Wildlife Refuge.
May 2, 2022

Wildlife and nature lovers from all over can get a 24/7 glimpse into the life of a pair of captive red wolves thanks to recently installed wildlife webcams at the Red Wolf Center in Columbia, N.C., located on Pocosin Lakes National Wildlife Refuge.

With one live streaming webcam in their den and another in their outdoor enclosure, viewers can watch (and occasionally hear) the red wolves anytime as they move about the wooded area and interact, snooze, sniff, play, eat and maybe even howl. The exhibit red wolves – a 14-year-old male dubbed #1714 and an 8-year-old female dubbed #2061 – can’t be released into the wild and live at the education and health care facility. The cameras also will help staff and caretakers observe the wolves from a distance as they continue learning about their behavior and needs while monitoring their health and well-being.

“Red wolves are not only extremely rare, but they’re also naturally shy, wary of humans and skilled at making themselves hard to spot,” said Katerina Ramos, North Carolina Wildlife Federation’s (NCWF) refuge volunteer and programs coordinator for the center. “It’s nearly impossible to view them in the wild, which is why we’re so excited for people to be able to watch these amazing creatures anytime, day or night.”

Once the fiber optic cable was installed at the center to ensure fast streaming speeds, N.C. Wildlife Federation staff spent a week positioning and testing the camera equipment. While the cameras can be maneuvered to capture several viewpoints, there isn’t a webcam behind the den where the wolves sometimes nap in the daytime.

“We’re eager for a wider audience to see the close-knit behavior wolves show when they’re bonded, especially how they behave with one another day to day and when in the den,” Ramos said. “Most people don’t realize these animals’ caring nature towards their pack members. It’s truly magnificent to see the wolf behavior in action, and the cameras will help us virtually experience more of those interactions.”

American red wolves (Canis rufus) are listed as a critically endangered species, with fewer than 25 in the wild and only a few hundred in captivity in facilities across the country. North Carolina is the only place where a wild population of red wolves exists. Their survival depends on the U.S. Fish and Wildlife Service’s (USFWS) Red Wolf Recovery Program and the work of program partners like NCWF. In mid-April, a litter of 6 wild red wolf pups (4 females, 2 males) was born – the first since 2018 – and renewed hope for the species’ survival.

N.C. Wildlife Federation has a long history with red wolf education, outreach and recovery. We partner with federal and state agencies, landowners and other conservation NGOs to address challenges facing red wolves in the wild.

To prepare for the 2022 red wolf release season, NCWF and USFWS purchased and installed four electronic message boards to alert drivers there may be red wolves (and other wildlife) crossing the area. Additionally, donors Loti Woods and Dale Weiler helped fund a hard-sided acclimation pen for red wolf releases.

Recently, NCWF collaborated with USFWS’s Partners for the Fish and Wildlife to design and launch Prey for the Pack, a cost-share program that provides technical and financial support to private landowners to help create and improve habitat for red wolves and other wildlife.

“Species recovery requires resources and effort, and it will take all of us to ensure red wolves endure for generations to come,” Ramos said.

Learn more about red wolves and ways to support them