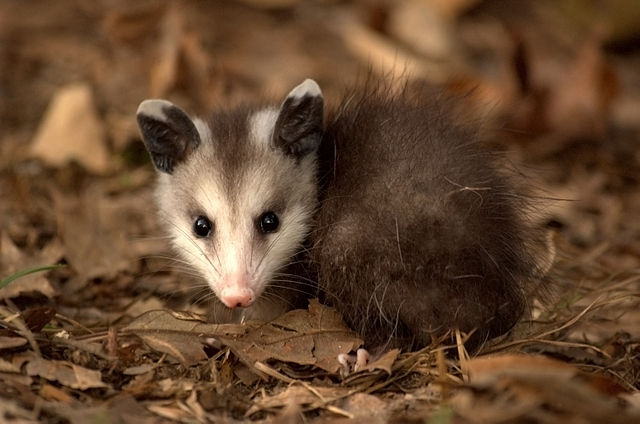 The Virginia opossum (Didelphis virginiana) is a marsupial that is native to regions of North America, occurring from southern Canada through much of the United States and south into Mexico and northern Costa Rica. It can be found in all three regions of North Carolina.

While these opossums prefer deciduous woods near streams or ponds, they also live in a variety of other habitats across the state. Many people recognize opossums because they have seen them dead on the roadside or caught them in the midst of a midnight garbage raid.

They are medium-sized mammals with pointed noses, small black ears, whitish-gray to black fur and a long, bare tail. Their movements are slow, but versatile, as they can traverse land, swim and climb trees. Unlike other North American mammals, opossums have opposable thumbs that allow them to latch onto branches or carry objects as they scurry up a tree.

While they are thought colloquially to hang from branches by their tails, this behavior is inaccurate as opossum tails are unable to support the weight of juveniles or adults and they lack the abdominal strength to pull themselves up. The prehensile tails, however, are useful in helping maintain balance or curling tightly around objects so the opossum can grasp or carry them.

Opossums and other marsupials carry their young in a pouch. Once a pair has mated and the offspring are born, the babies must crawl into the mother’s pouch where they will feed until they are weaned at approximately 100 days old. Typically, 4-7 young remain in the mother’s pouch or ride on her back until they are weaned. More information on young opossums can be found in the Babies, Babies Everywhere webinar hosted by NCWF’s HAWK chapter.

Opossums have a nocturnal habit, meaning that they are most active from dusk to dawn. They may occasionally be seen during the day searching for food or shelter. While it is unusual to see them about during the daytime, it is unlikely to be a sign of rabies because opossums have a lower body temperature that does not support the virus, making this disease extremely rare in opossums.

An opossum may hiss or growl if threatened, but if predators continue to advance, the opossum plays dead while emitting feces or a foul-smelling substance to ward them off.

Diet and Benefits to Humans

Opossums are omnivores that eat a variety of insects, invertebrates and small mammals. They make a great addition to urban and natural ecosystems, keeping pest populations in check including snails, mice, cockroaches and slugs.

One other notable item on the menu is venomous snakes due to their ability to neutralize the venom. These amazing creatures are remarkably resistant to the venom of North Carolina’s venomous snakes and have been known to eat copperheads, cottonmouths and rattlesnakes. While it is believed that opossums will consume ticks in the thousands, studies have shown that ticks are not a preferred prey item when opossums are in their natural habitat.

You Can Help Protect Opossums

Opossums often succumb to vehicle collisions because they react to oncoming threats by involuntarily freezing in place. It can take anywhere from a few minutes to four hours for the opossum to regain mobility. You can help protect these fascinating creatures by adhering to the posted speed limit and watching the roadsides for their reflective eyes at night. Securing garbage cans and other receptacles that may attract wildlife can also prevent conflicts and the often lethal ingestion of trash by wildlife.

Check out NCWF’s webinar about Impacts of Trash on Wildlife to learn about how garbage harms wildlife and how you can make a difference. Removing trash from the landscape and restoring habitat by gardening for wildlife are two easy ways to support your local wildlife.