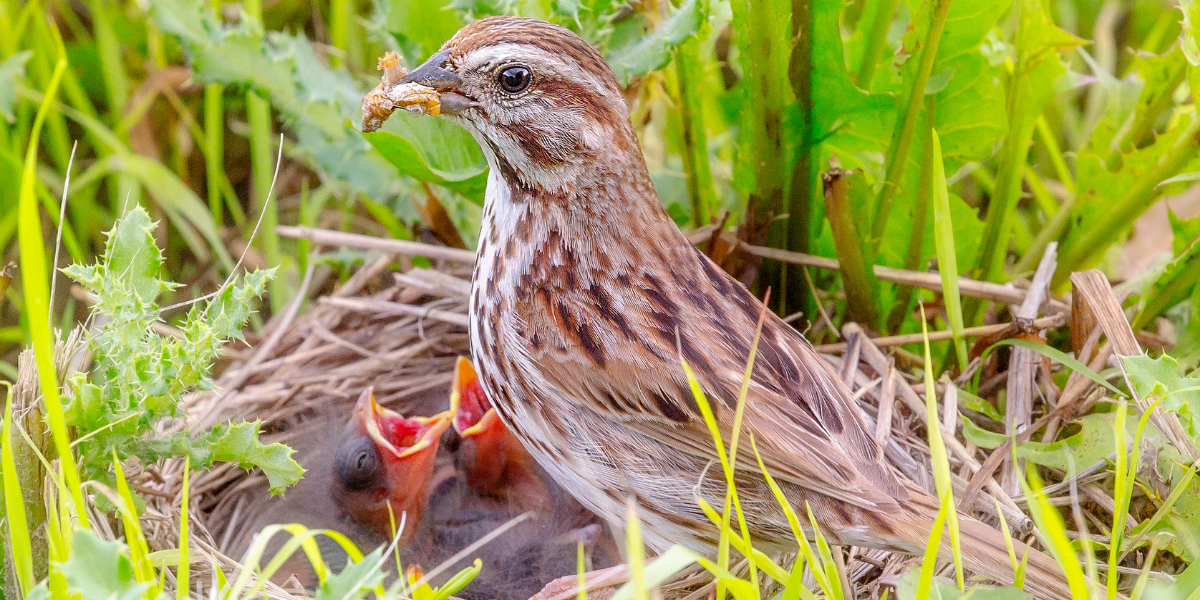 Lark sparrows are nesting this month. These ground-nesting sparrows are rare and occasional breeders in our state; most breeding records are from military drop zones and other large, grassy areas in the Sandhills.
May 25, 2022

Opportunities to experience natural North Carolina are as diverse as our state’s spectacular landscape. And there’s no shortage of things to do, see and hear this month – from emerging Japanese beetles to flying rosy maple moths to blooming venus flytraps. It’s also Great Outdoors Month and National Pollinators Month. Take a look at the June calendar below and explore NCWF’s upcoming events.

June 1: Venus flytraps are in bloom in the southeastern Coastal Plain.

June 2: Galax is in bloom in the Mountains and western Piedmont.

June 3: Flame azalea, columbine and fire pink are in bloom in the Mountains.

June 13: Bluehead chubs are spawning. The large stone nests constructed by these abundant, stream-dwelling minnows are used by several other minnow species.

June 13: National Weed Your Garden Day (just the invasive ones!)

June 14: Rosinweed is in bloom. Ten-lined June beetles are flying.

June 15: Nature Photography Day. The perfect day to head outdoors and get snapping for our annual wildlife photo contest. Learn more and enter.

June 16: Gray’s lilies are in bloom in the Mountains. Carolina gopher frog tadpoles and tiger salamander larvae are transforming in the Sandhills and Coastal Plain.

June 17: Five-lined, southeastern five-lined and broadhead skinks are nesting. Unlike most reptiles, these lizards remain with their eggs, guarding them until they hatch.

June 19: Peak bloom for rhododendron and mountain laurel in the Mountains. Good places to admire this floral show include Roan Mountain in Mitchell County and Craggy Gardens on the Blue Ridge Parkway in Buncombe County.

June 22: Sourwood is in bloom.

June 24: Spurred butterfly pea, sticky false foxglove and sandhill dayflower are blooming. Lark sparrows are nesting. These ground-nesting sparrows are rare and occasional breeders in our state; most breeding records are from military drop zones and other large, grassy areas in the Sandhills.

June 25: Fungus Among Us: Wild Mushroom Identification Walk. Learn the basics of foraging wild mushrooms. Event part of NCWF’s Walks on the Wild Side series.

June 26: National Canoe Day—get a canoe onto your favorite stream, lake or pond if you can. Wild quinine and daisy fleabane are blooming.

June 27: Green June beetles begin to emerge especially following a rain that softens the soil so the adults can dig their way to the surface. National Wildlife Federation’s Great American Backyard Campout. Take a kid (or adult) camping!

June 28: Northern pine snakes are nesting. These uncommon snakes, found mostly in our Sandhills region, are unique in that females typically spend several days digging a long tunnel ending in a nest chamber, where they deposit their small clutch of large eggs (the largest eggs of any of our snakes). Their nest chambers are sometimes used as refugia by other animals.

June 29: Green salamanders are nesting in our southern Mountains. These fully terrestrial salamanders attach their eggs to the ceilings of narrow rock crevices, attending them until they hatch.