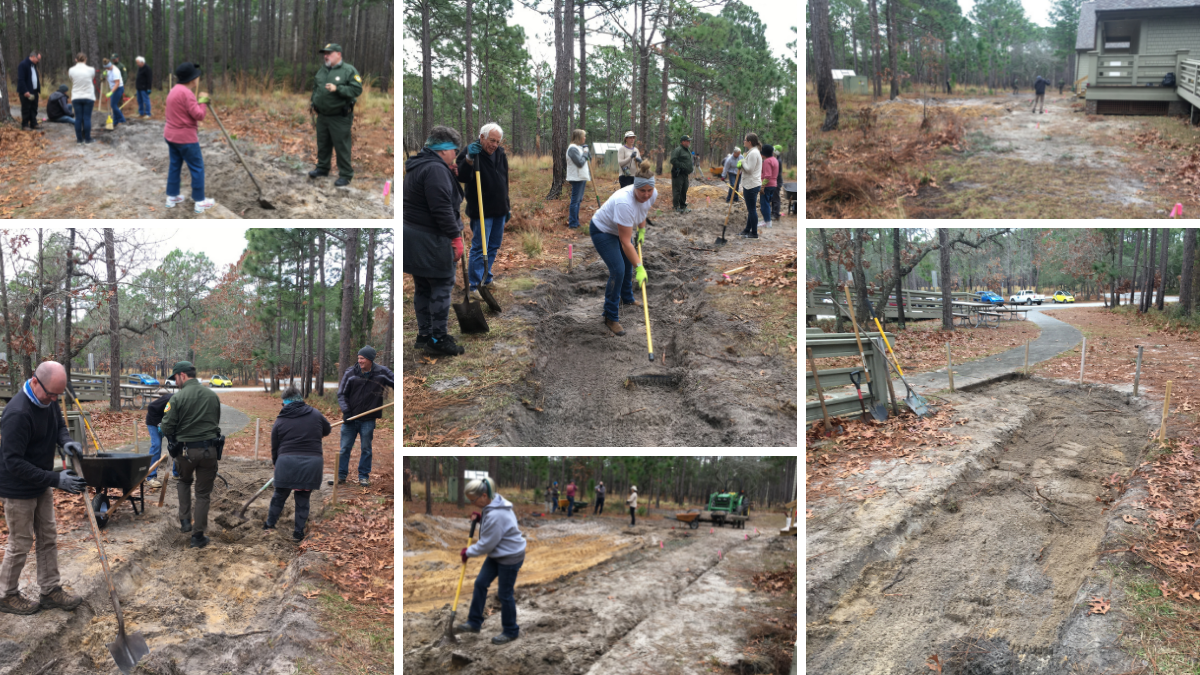 Tons of dirt was flying for Venus flytraps in January when staff and volunteers from North Carolina Wildlife Federation, our Island Wildlife Chapter and Friends of Pleasure Island State Park gathered at Carolina Beach State Park.

After a year of planning, the group broke ground on a carnivorous bog garden to restore flytrap habitat and help reduce plant poaching in the park. The bog garden will be located behind the visitors center to allow people to see the native carnivorous plants in their natural habitat.

“Due to habitat loss by development, mismanagement of habitat through fire suppression, and poaching of natural populations, the Venus flytrap is on the list of threatened species and under assessment to be listed as endangered,” said Madison Ohmen, NCWF’s conservation coordinator. “Creating a bog garden will provide educational opportunities for visitors and allow them to admire the Venus flytrap without venturing into the park and being tempted to perform illegal collection.”

She added, “The reality is that many people living or visiting within local populations poach them to resell for profit. Poachers uproot the plant, strip off the trap and take just the root bulb. More than 100 can fit in the palm of a hand. Poachers fill their pockets or small coolers with flytraps and sell them wholesale for about a quarter each.”

Poaching isn’t the only reason for Venus flytrap decline. They’re also at risk of extinction because development drains their bog habitats. Roughly 70 percent of historic flytrap habitat is gone.

At the digging event, state park staff used an excavator to create a depression in the ground where pond liners will be laid and filled with peat moss to create the perfect soil conditions to support Venus flytraps, pitcher plants and other native bog plants.

Meanwhile, volunteers used shovels and wheelbarrows to help dig a path for the ADA-accessible sidewalk and a utility tractor and dump truck to remove the displaced soil. Future plans include the installation of educational signs to raise awareness about flytraps in the wild, the reason for their decline and how people can help.

Support future habitat projects like this by making a donation to The Butterfly Highway.

NCWF hosts Dr. Johnny Randall, the Director of Conservation Programs at the NC Botanical Garden, for an introduction to Venus flytraps, followed by a presentation about the Venus Flytrap Inventory by Laura Hamon, a flytrap researcher and PhD candidate at NC State University who coordinates the range-wide assessment of Venus flytrap populations. NCWF recently joined the Venus Flytrap Champions network, a collaboration of entities that will offer support to public and private landowners are interested in Venus flytrap conservation and how to preserve this unique predatory plant on their land and beyond.

Venus Flytrap Champions is a collaboration of agencies and nonprofit organizations that serve as a support network for people managing Venus flytrap habitat on private property. The final webinar in the series recognizes these champions who assist landowners and land managers in the Carolinas interested in preserving populations of this rare carnivorous species. We believe landowners can play a significant role in maintaining and increasing the remaining habitat for flytraps and the other insectivorous and uncommon plant species that grow with it.

NC Wildlife Federation, a proud partner of the Venus Flytrap Champions network, hosts a presentation on management efforts and techniques on public and private land with Andy Wood, Director of Coastal Plain Conservation Group and private landowner in Pender County, and Lesley Starke, the NC Plant Conservation Manager of the NC Department of Agriculture and Consumer Services at Boiling Springs Nature Preserve.

The Biology and Conservation of Venus Flytraps

The Island Wildlife Chapter of NC Wildlife Federation hosts an educational webinar on venus fly traps in the Southeast with Jessica Roach, a Master’s student at the University of North Carolina Wilmington in the Biology and Marine Biology Department. Her thesis work focuses on rare, endangered plant species endemic to the southeastern Coastal Plains region