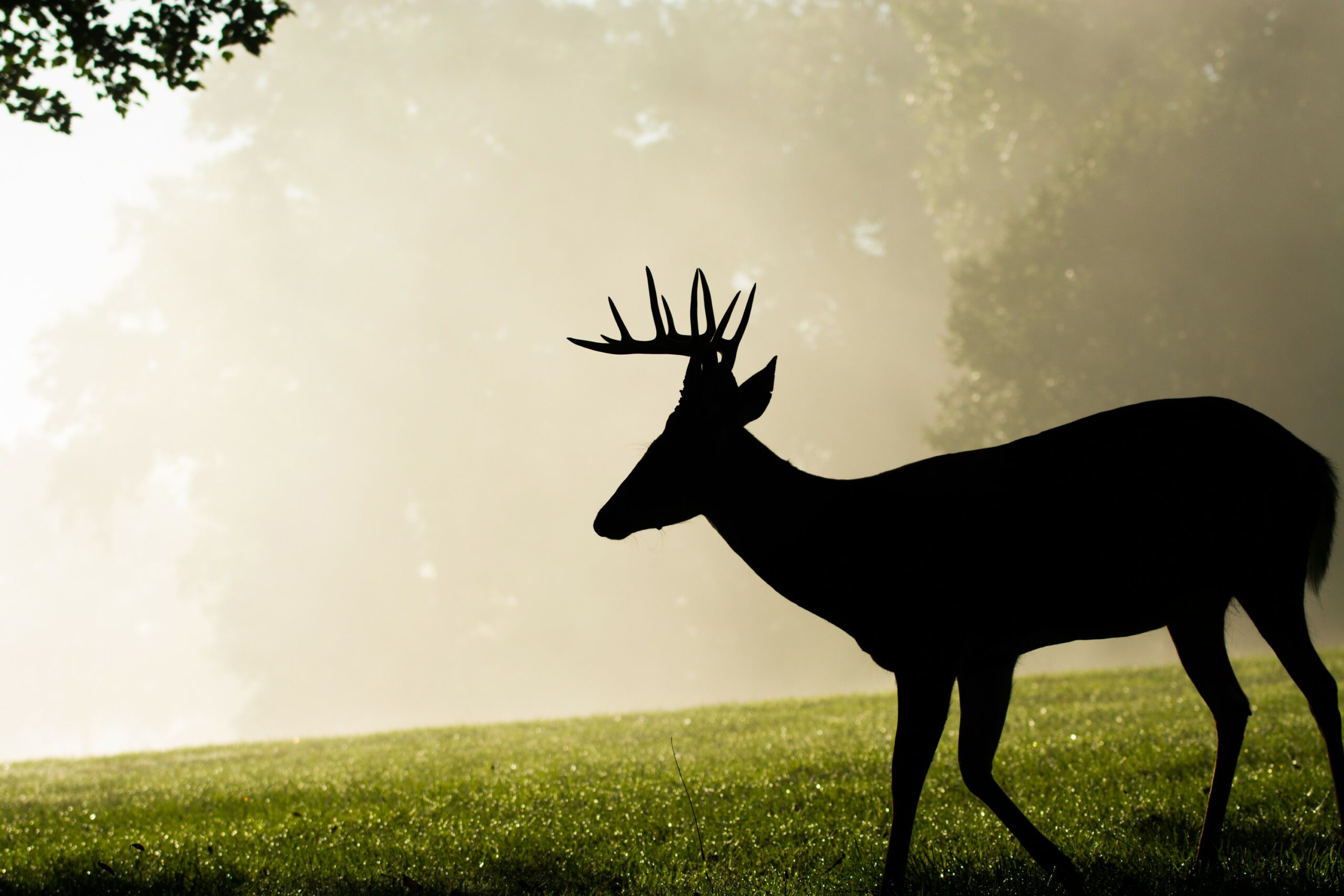 Some call them the phantoms of the woods, noiseless silhouettes sleeking through old-growth forests and stately stands of pine. Others merely see them as the pesky neighbors who pillage our backyard gardens. Regardless of your relationship with the white-tailed deer (Odocoileus virginianus), they are undoubtedly a North Carolina staple species.

Though many species escape our observation on a day-to-day basis, nearly everyone is familiar with the ever-present white-tailed deer. There are estimated to be around 36 million white-tailed deer in the United States and – according to North Carolina Wildlife Resources Commission (NCWRC) – around 1 million in North Carolina, alone.

While this large number certainly does not sound like a population in distress, that has not always been the case. In the early 1900s – due to a combination of overhunting and habitat loss – the white-tailed deer population in North Carolina is estimated to have been at around 10,000 individuals, a mere 1/100th of the current population. However, due to large-scale conservation and rehabilitation efforts between the 1940s and the 1970s, the population was successfully restored.

In fact, some areas of the state are experiencing an overabundance of white-tailed deer, leading state wildlife authorities to encourage deer hunting to lessen the potential for disease transfer and the detrimental impacts of overgrazing on crops and other vegetation. 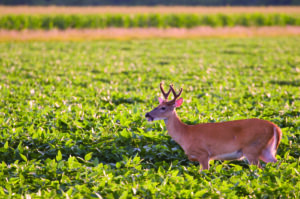 As resilient creatures, white-tailed deer can thrive in both rural and urban settings. Much of their waking life is spent traveling back and forth between bedding areas – such as hardwood creek bottoms which offer cover from the elements and watchful predators – and feeding areas – anything from soybean and corn fields to forested areas with wild acorns and muscadine grapes.

Deer are very communal animals and prefer to travel in groups – particularly does (females) and fawns (young deer) who are still learning the ways of the world from their elders. As a traveling group, they can better monitor for threats and locate resources.

Bucks (male deer) grow individually unique sets of antlers, which are bone structures grown from the crown of the head, meant to provide protection and broadcast social status among deer. Bucks grow and shed their antlers each year. Upon regrowth in the spring and summer months, antlers develop a soft, furry covering called “velvet”, which encourages rapid antler growth. When a buck’s testosterone levels rise towards the end of the year, this velvet covering begins to peel off. Bucks will then rub their antlers on young saplings with supple bark to further remove the irritating covering – and to mark their territory.

White-tailed deer have a variety of glands all over their body that produce pheromone-rich scents for communication and reproduction. One such gland is located on a buck’s forehead, between the antlers. When a buck rubs a tree with his antlers, the pheromones from this gland are secreted onto the bark, making the tree a sort of white-tail billboard that communicates the buck’s social status, suppresses the mating drive of competitive younger bucks, and stimulates does.

Scrapes are another form of “signpost” behavior utilized by white-tailed bucks. A buck will designate a scrape area by breaking off the end of an overhanging tree branch and pawing at the top layer of leaves and soil on the earth beneath the branch, creating a divot in the ground. The buck will often urinate on the exposed earth to mark his territory and advertise his presence to other deer in the area. These practices of “scraping” and “rubbing” are only two of many factors that usher in the chaotic white-tail mating season known as “the rut.”

The Rut – Love is in the Air 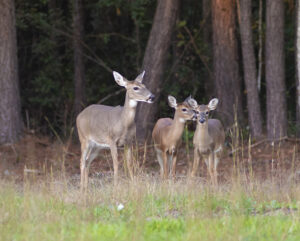 The world of the white-tailed deer drastically changes towards the end of the calendar year as the summer heat gives way to autumn winds and wildlife prepares for the long, cold winter ahead. Along with the change of the seasons come hormonal changes in whitetail deer, signaling entry into the mating season. Though this season varies by region, it typically begins around October and sticks around through the end of the year, sometimes even lasting into the early months of spring.

During this time, the testosterone levels in bucks rise dramatically, bringing with it significant behavioral and social changes. They become territorial and more aggressive towards other males in their immediate vicinity and, becoming more solitary, turn their attention away from prioritizing food and instead pursue their higher reproductive calling: fertile does.

Does experience hormonal shifts as well, and only go into heat – or estrus – for a mere 24 hours during the mating season. This means that bucks are in a mad frenzy to find a fertile doe in the incredibly short 24-hour timeframe when a doe is willing to entertain the advances of an aggressive buck. A buck, smelling the pheromones produced by a doe during her estrus cycle, will often court a single doe for 24 to 48 hours, waiting until she is comfortable enough and fully in the mood to mate.

Because of this slim timeframe, it is often difficult for a single buck to mate with more than a few does per season. Studies estimate that on the high end, a mature buck will sire only six offspring per season.

After successfully mating, a doe will typically go into labor about six months later and bear a fawn (and sometimes twin fawns) by May or June of the next year. Fawns are born with light-colored spots across their body that aid in camouflaging them on the sun-dappled forest floor. This is especially useful as does will often leave their fawns to bed down in protective places while they go off to continue foraging and patrolling their territory. But the fawn will typically stay with its mother for several months to a year while the mother teaches it to forage and to watch for predators.

It is common in the late spring and early summer to stumble across a bedded fawn that may appear abandoned. However, NCWRC urges people to leave these fawns alone. Even when not visible, the mother is normally nearby to a young fawn and will return to its side once intruding humans or other threats have left the area. 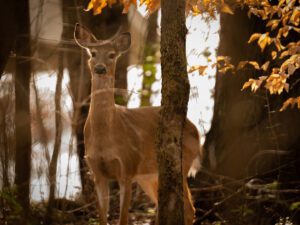 As a prey animal, white-tailed deer have evolved to develop powerful senses to protect itself from sly predators. Though each of its senses has its shortcomings, they all work together to provide a sharp natural security system for a deer and its companions.

White-tailed deer have an impressive 300-degree range of sight, but only 20/60 vision. This means that in full daylight, they see objects at 20 yards with the same clarity that humans would see objects at 60 yards. That is to say: they are not adept at seeing things with clarity at a distance.

However, the deer excels in its ability to see in low-light situations. Anyone who has seen a deer on the roadside has noticed its unmistakable eye shine in the glow of a car’s headlights. This eye shine is the result of light passing through the cones and rods of the deer’s eyes and reflecting off a special membrane – called the tapetum lucidum – on the back of the retina, which reflects the light onto the eye’s cones and rods a second time. This double exposure to dim lighting makes deer vision 18x better than our vision in low light. Because their vision is well-suited to twilight, white-tailed deer are considered a crepuscular animal – an animal that most thrives at dusk and dawn.

Where a deer’s vision falls short, it makes up for in its hearing abilities. At our best, humans are capable of hearing around 20,000 hertz compared to a white-tail deer’s 54,000 hertz. On top of their uncanny hearing potential, deer have very large cone-like outer ears that function like radar dishes, constantly adjusting and rotating to pick up sounds from potential threats at every possible angle.  This level of hearing is essential in a world where the slightest rustle of a leaf or the snap of a twig could mean imminent death.

A white-tailed deer’s strongest sense is without a doubt its sense of smell. Recent science suggests that humans have around 30 million olfactory receptors in our noses that pick up complex scent stimuli in the surrounding environment. The white-tailed deer comes in with around 297 million olfactory receptors, meaning they can detect varieties of scents that we cannot comprehend.

Deer are in a perpetual state of alert against several different predators that may be stalking them at any minute. With all of these combined senses, the white-tailed deer makes itself a formidable prey, but there are some threats that no number of biological senses can protect against. 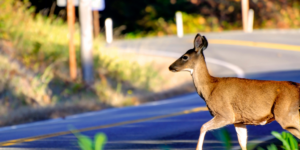 Overarching many of the top threats to whitetail deer is one common to wildlife destruction, in general – habitat loss. Deer depend on hardwood forests for the bulk of their bedding territory, food sources, and protection from external threats. With increased urban development, these crucial natural settings are often reduced and deer herds are pushed into increasingly urban areas. Not only does this present a pest issue for farmers and gardeners, but it also pushes deer away from their natural congregation and feeding areas and into more hostile locales with less nutritional food sources.

Additionally, deer and other wildlife species will typically take the path of least resistance and, with the loss of natural wildlife corridors, deer are forced to move through and across manmade roadways, which presents new dangers of its own.

According to a report from the North Carolina Department of Transportation, there have been around 20,000 animal collisions on state roadways annually for the past two years – most of which involved white-tailed deer and occurred most often in the mating season and specifically during the twilight hours of the day. While the number of vehicle-deer collisions undoubtedly increases r during the mating season, a portion of these collisions might be prevented through the installation of wildlife overpasses or underpasses in areas of high wildlife mortality.

Chronic wasting disease is a deadly disease that affects the lymph and neurological systems of deer and other cervids, producing malformed prions (proteins) in the brains of deer, resulting in devastating symptoms that ultimately cause the deer to “waste” away. While the incubation period is long-lasting, clinical signs only become evident much later after infection and are quickly followed by death. It is transmitted among whitetail deer through contact and bodily fluids and has spread across the United States over many decades, presenting significant challenges for wildlife management agencies.

North Carolina recently detected its first positive cases of CWD in white-tailed deer, prompting the designation of surveillance areas within the state and the implementation of special regulations surrounding white-tail harvest to mitigate disease transmission.

A further complication of combatting CWD is that there is no live test available for deer. The only surefire way to confirm infection is through lab testing of brain tissue and lymph node collection. It is critically important that adequate disease sampling occurs; therefore, NCWRC has developed a CWD management plan and set up collection sites across the state to test hunter-harvested deer.

Boots on the Ground 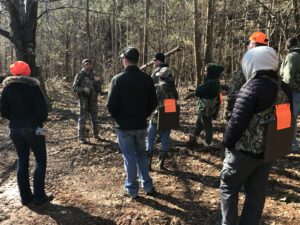 White-tailed deer are a crucial facet of wildlife in North Carolina. As such, North Carolina Wildlife Federation is dedicated to the protection and management of this species, working in conjunction with the NCWRC to provide important information and educational resources to those who share wild spaces with these animals.