Meet Some of NC’s Most Intriguing Residents: Bats 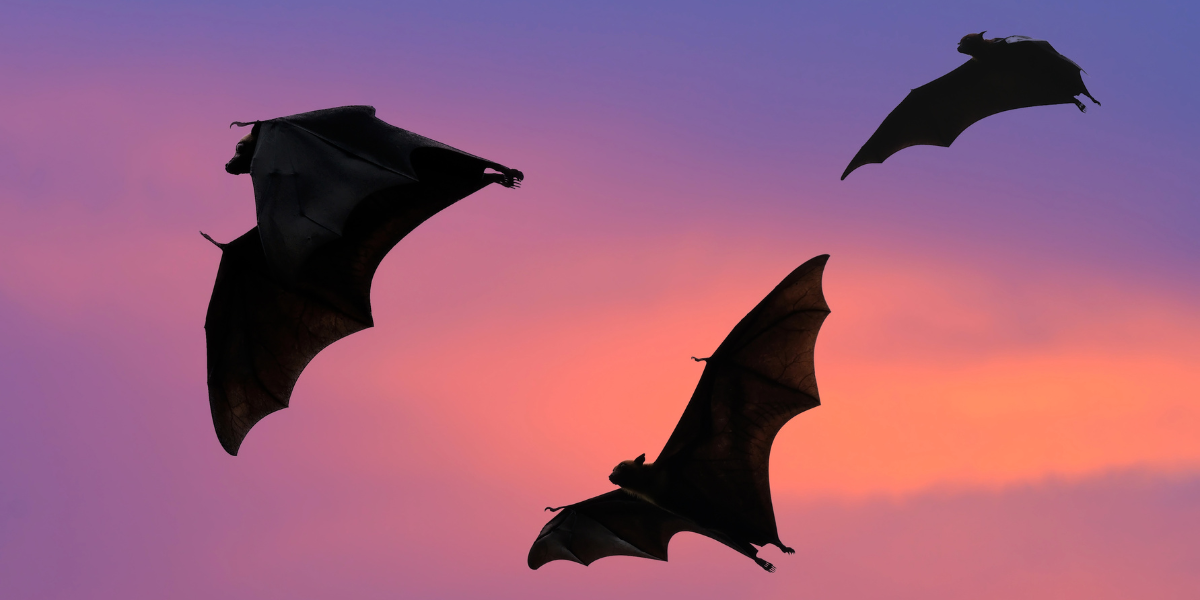 Holy bat guano! Living right in our backyards and seen flying across North Carolina skies are some of the natural world’s most fascinating, ecologically essential and aerodynamic creatures: Bats. 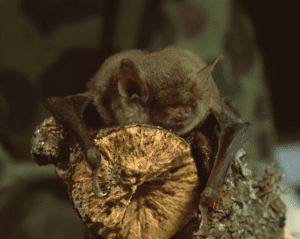 Other species, such as the red bat, Seminole bat, silver-haired bat and hoary bat, are tree roosting bats and prefer dense clumps of leaves and even Spanish moss. Several of these nocturnal species, including the little brown bat, Mexican free-tailed bat and Rafinesque’s big-eared bat, will use manufactured structures such as old buildings and attics, warm barns, bridges and artificial roost structures for maternal colonies.

N.C. State Extension also notes that bats provide helpful aids for medical research, particularly for the blind, who, like bats, can learn to navigate using echolocation. In addition, bats are the only major predator of night-flying insects, acting as a valuable natural pest control resource.

If the *Recovering America’s Wildlife Act becomes law, there may be hope for the northern long-eared bat, Myotis septentrionalis, a small flying mammal that catches insects in flight and spends its summers hanging out in tree cavities in the depths of old-growth forests.

In the short time since northern long-eared bats were classified as threatened, population numbers have declined rapidly, including in the southernmost portions of its range. The bat species with eye-catching ears has long warranted endangered species protection, especially since being hit hard by white-nose syndrome, a deadly fungal disease. In addition, habitat loss remains a crucial threat to the northern long-eared bat and all bat species that use trees for roosting.

Northern long-eared bats generally follow the same annual life cycle as other bats: winter hibernation, spring and fall migration, and summer roosting; however, unlike many species of bats, northern long-eared bats are a forest interior species that uses closed, intact forest stands not only to select roosting sites but also to undertake foraging activities.

Common characteristics of roosting and foraging habitats include forests with large roost trees, available snags and live trees, and a proximate interior forest habitat with a high canopy. The species forages for insect prey, generally most abundant in closed forest stands or around streams under canopy closure. For summer roosting, northern long-eared bats select locations based on available cavities and bark crevices within trees and snags, stand and tree structure, and forest successional patterns.

U.S. Fish and Wildlife Service (FWS) is proposing to reclassify the northern long-eared bat from threatened to endangered under the Endangered Species Act – a recommendation N.C. Wildlife Federation supported through formal comments and a commitment to work to recover the species throughout its range.

*Recovering America’s Wildlife Act (RAWA) is landmark legislation that will prevent extinctions and change North Carolina’s wildlife for generations to come. If it becomes law, North Carolina will be eligible for up to $25M annually to help at-risk fish and wildlife. 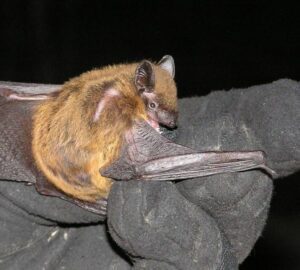 Evening bats, Nycticeius humeralis, loop around the sky at dusk and can be found in forests, parks, cleared sites and some urban areas. These bats form colonies that roost in hollowed trees, buildings, attics or even behind loose bark – but rarely in caves.

The evening bat has dark brown fur with black patches on the ears, wings and tail. They’re small bats, about 3-4 inches in length, with a 10-11 inch wingspan. They have relatively good night vision, but echolocation (using reflected sound to locate objects) helps them identify prey and avoid obstacles in flight. Their size differentiates them from other bat species, along with their short rounded tragus, a structure inside the ears of bats that helps with echolocation. Animals such as dolphins, shrews and certain species of birds also use echolocation for hunting and navigating amidst the darkness.

In spring and summer, evening bats will fly through forests, water bodies, and other habitats in search of food. Their warm-season diet mainly consists of moths, beetles and flying insects. A colony of 100 evening bats can consume more than 1.25 million insects each season.

Female evening bats give birth to one to three pups from late April to early June. Around this time, the bats form a nursery colony, which is a congregation of evening bats that collectively help raise the young. Most bat pups are weaned within 6-9 weeks and become independent shortly after that. It’s essential to avoid disturbing roosting areas during pup season.

In the winter, it’s believed that these bats will migrate south to warmer climes and remain active, or they will overwinter in hollow trees or bark until spring. If evening bats overwinter in North Carolina, they will find a hibernation area and store fat during the summer and fall. During hibernation, it’s important not to disturb bats so they don’t expend energy. 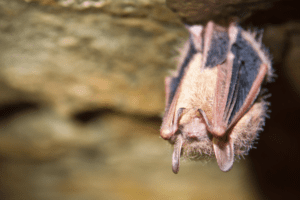 The tricolored bat (Perimyotis subflavus) is one of the smallest, if not the smallest, bat in North Carolina, with a wingspan of nine inches, a weight of 0.3 ounces, and a length of barely 3.5 inches. It was formerly known as the Eastern pipistrelle, but studies showed it was unrelated to the Old-World species.

Its thin, uniquely colored hairs are dark grey at the base, yellowish in the center, and brown at the tip—hence the tricolor moniker. Documented in more than half of North Carolina counties, it very likely occurs in every county of the state. The species occurs throughout the Eastern U.S., from Canada to eastern Mexico.

In spring, tricolored bats emerge from hibernacula, such as caves and mines, and disperse to summer foraging and roosting sites. Summer roosts are often in trees, rock outcrops, and, infrequently, buildings. They forage along waterways and forest edges and eat small flying insects. Before white-nose syndrome spread to North Carolina in 2011, tricolored bats were one of the most common bats in the state. The tricolored bat is one of the most susceptible bat species to WNS.

White-nose syndrome also has impacted bat species. Since its discovery in 2006, the deadly cold-loving fungal disease from Europe has killed millions of hibernating and cave-dwelling bats across the continent. Scientists hypothesize that WNS disrupts bats during hibernation, causing them to expend valuable energy and become susceptible to dehydration, starvation and death.   North Carolina’s first confirmed case of white-nose syndrome was in 2011.

WNS doesn’t seem to have affected susceptible bat populations in the Coastal Plain, either because it’s not there or because the disease cannot get a hold on bats that likely hibernate much less than western bats. Recently, there have been promising signs some northern long-eared bats in warm climates like North Carolina may be better able to withstand white-nose syndrome. 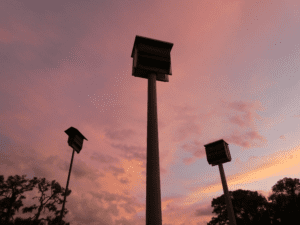 Create a bat-friendly backyard by installing a bat house.